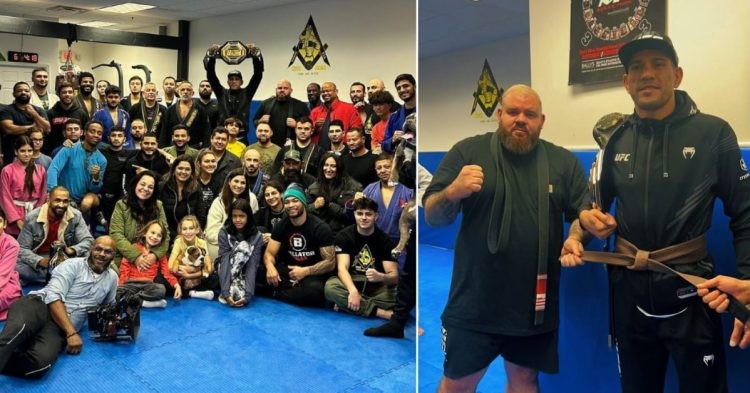 Alex Pereira is now a Brown belt in Brazilian Jiu-Jitsu after being awarded the belt from his coach Plinio Cruz days after his stoppage win over Israel Adesanya at UFC 281.

Soon after the news became public, UFC fans trolled Alex Pereira for getting dominated on the ground by Purple belt Israel Adesanya at UFC 281. The former Glory kickboxer has had only 8 mixed martial arts bouts with zero submission victories to his name. On the contrary, the sole loss in his MMA career has come via submission back in 2015.

While it’s safe to say that the submission loss was quite a long time ago, it’s another to think he has shown anything significant on the ground over the course of his mixed martial arts journey. Fans did not mince words, and slammed Alex Pereira’s coach Plinio Cruz and Poatan, for making BJJ, as Islam Makhachev aptly put it, look “bad”.

Khamzat will expose him

What did he do in that fight to get a brown belt? Closed guard?

“Black belt, who give him that? We have to check that now. And we have to cancel, brother, many black belt because they make the jiu-jitsu look bad because a lot of guys have black belt but I don’t know.” Makhachev had said earlier while talking about Dustin Poirier’s ground game.

And Izzy is a purple belt

Awarded a belt after getting controlled on the ground by a kick boxer? Lol

Despite getting dominated on the ground, Alex Pereira is now a higher degree belt in BJJ than Israel Adesanya. Quite amusing nonetheless.

While his ground game may not be something that has impressed fight fans, Pereira’s striking has truly been a show-stealer.

It goes without saying, Pereira was behind on the scorecards leading to the fifth round. While he may have triumphed over Adesanya, fans are of the opinion Pereira doesn’t stand a chance against fighters who like to mix up their game.

Be that as it may, with the Brown belt on his waist, one wonders how much improvement Pereira will show in his ground game going forward in his UFC career.