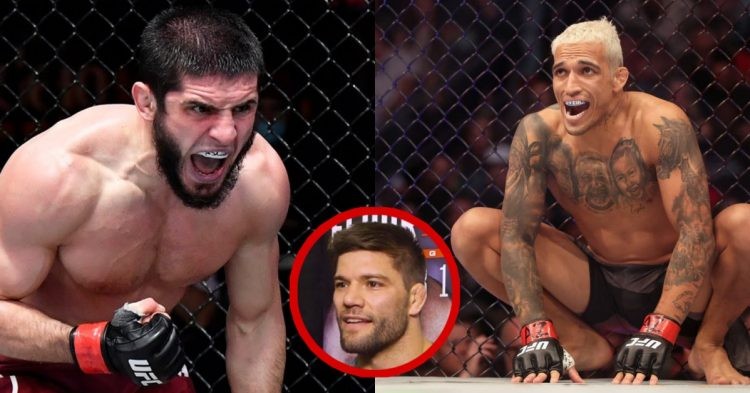 Former Strikeforce champion and UFC veteran has a word of advice for Islam Makhachev ahead of fighting Charles Oliveira. Josh Thomson, who fought in the UFC 4 times, is a former teammate of Makhachev. Both of them were a part of the American Kickboxing Academy (AKA).

UFC confirmed the news that Islam will finally get the much-deserved title shot against Charles Oliveira at UFC 280. The news was received with huge fanfare as the audience clamoured to see the two most deserving candidates going head to head for the vacant UFC lightweight title. With two elite grapplers fighting it out in the Octagon, there is a risk for Islam getting submitted.

Oliveira has the tendency of finding submissions seemingly out of thin air. It makes him one of the most dangerous fighters to have a grappling contest with. Although Makhachev is perhaps the strongest grappler in the division, Josh Thomson issues a warning to his former teammate.

Charles Oliveira has managed to secure 16 submission wins in the UFC. It makes him the most prolific submission artist in the company’s history. So far, he has submitted the likes of Nik Lentz, Jim Miller, Kevin Lee, Dustin Poirier and Justin Gaethje. Almost all the names mentioned here, have very credible grappling experience.

But their grappling abilities did not match the skill levels of Oliveira who is a highly respected 3rd degree Brazilian Jiu-Jitsu black belt. ‘Do Bronx‘ has shown that he can submit any fighter inside the Octagon. But Islam Makhachev will perhaps be the toughest challenge of his career so far.

The Khabib Nurmagomedov protege has only one style of fighting and it is very effective. Islam will definitely shoot for a takedown sooner rather than later. But that may not be the smartest game plan against Charles. Shooting for a takedown will expose Islam’s neck and it will open up the possibility of a guillotine choke.

Even if Makhachev manages a takedown, the Brazilian will not be too bothered about that. With sharp elbows and fast hands, Oliveira will certainly be the more active fighter from the guard. Islam is yet to come across any fighter who even remotely resembles Charles. So it is entirely possible that Charles may come out of UFC 280 with another submission on his record.

Do you think Charles Oliveira can secure a submission against Islam Makhachev? Or will Makhachev outmuscle Charles and become the new UFC Lightweight Championship? Let us know in the comments down below.