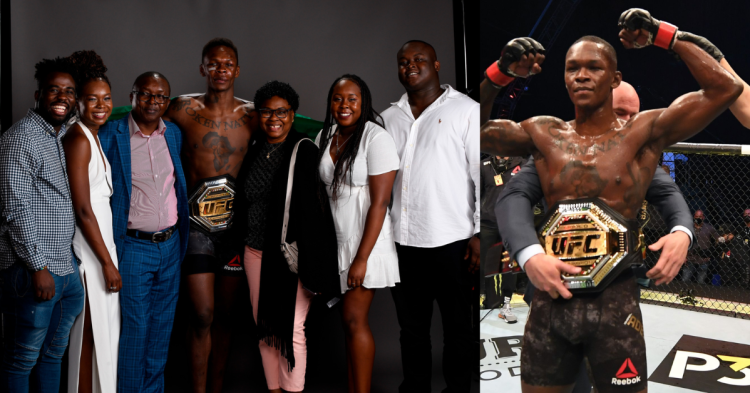 It holds no doubt that Israel Adesanya is on the way to becoming one of the greatest middleweights of all time. Fighting out of New Zealand, Adesanya has amassed an undefeated record at middleweight. He is going to put that same record in peril against the Brazilian title challenger Alex Pereira this weekend. A lot is known about Adesanya as the fighter has a loud personality and he never fails to let his fans and opponents know about himself and his game.

Ahead of his sixth title defense against Alex Pereira, we get a chance to look a little further into both of their lives. Adesanya however, chooses to keep his private life separate from the one he lives in front of the camera. With that being said, information has been obtained about his family and his life away from the fighting. Even though he does not specifically try to hide his personal or family life, somehow, it’s never out there. His not being particularly discreet about it may ironically be the reason for the same.

Here, we will go over his family and his close ones. Hailing from Nigerian heritage, Adesanya has a close-knit family. Adesanya’s full name is Israel Mobolaji Temitayo Odunayo Oluwafemi Owolabi Adesanya.

Born in Lagos, Nigeria, Adesanya moved to New Zealand with his family in 2001. Considering his father held an office job as an accountant, Adesanya did not have a rough childhood unlike most of the other combat sports athletes. Israel Adesanya’s father is Oluwafemi Adesanya and the name of his mother is Taiwo Adesanya. Adesanya is an elder brother to four of his other siblings. One of his siblings is David Adesanya, popularly known as Dave Blackamoto, which is a play on the name of ESPN interviewer Brett Okamoto.

David runs the official YouTube channel of Israel Adesanya. In most of the YouTube videos he refers to himself as ‘Dave Blackamoto , the uncrowned featherweight champion of the world.’

Adesanya shares a close relationship with teammate and UFC lightweight Dan Hooker. hooker being the ‘captain’ of the team at City Kickboxing in New Zealand.

Adesanya is all set to fight Brazilian Alex Pereira, who is relatively similar in size to Adesanya himself. The Nigerian will face Pereira as the main event of UFC 281. The fans and the critics look forward to the the exciting matchup.