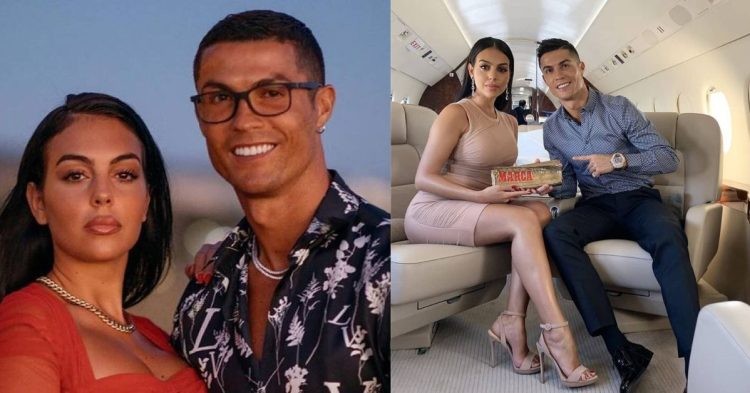 Cristiano Ronaldo and Georgina Rodriguez (Credits: MARCA and The Sun)

Piers Morgan‘s interview with Cristiano Ronaldo has taken headlines this week. In the first part of the interview, Ronaldo not only spoke about Manchester United but also regarding his personal life. He talked about the experience of losing one of his sons, and also the birth of his daughter.

Ronaldo on playing right after the passing of his baby son: “Difficult, very difficult to play after that. I always have good support from my family. Georgina told me to go and play, do what I like to do, forget about the situation.” [@PiersUncensored]

While speaking about his loss during the summer, Ronaldo spoke about how important Georgina Rodriguez is in his life. Speaking on how she helped him return to football after the loss of his child, Ronaldo said, “Georgina told me to go and play, do what I like to do, forget about the situation.” The second part of the Piers Morgan interview will air on Thursday.

According to The Sun, Georgina used to work as a model in Spain. She lived in a shared house and also worked as a $ 275-a-week shop girl. Her life was completely transformed after she met Ronaldo. Speaking in her Netflix documentary, Georgina explained how she met the Portuguese superstar. She had just landed her dream job of working as a saleswoman at Gucci in 2016 when she met him.

Georgina caught the former Real Madrid‘s eye. A few days later, the two met at another event, where they were able to talk freely and in a more relaxed environment. Speaking to The Sun, Georgina said, “It was love at first sight for both.” Ronaldo, in another interview with Piers Morgan, said, “She helped me so much. Of course, I’m in love with her.” In his interview yesterday that they both deserve to get married to each other.

How long has Ronaldo been with Georgina Rodriguez?

The couple met in 2016 when Georgina was a sales assistant at Gucci. She continued working there for a few months while she dated Ronaldo. Soon, media and fans would surround the stores in hopes of catching a glimpse of Ronaldo. Georgina and the management of the store mutually decided it would not be possible for her to work there anymore.

Since then, we have seen Georgina supporting Ronaldo at whichever club he plays for. She has been sporting a Real Madrid and Juventus jersey while Ronaldo played for those clubs. She moved with him from Spain to Italy and now England. Ronaldo has said it is his mother’s dream to see Georgina and him get married, but that is not in his plans for the near future.