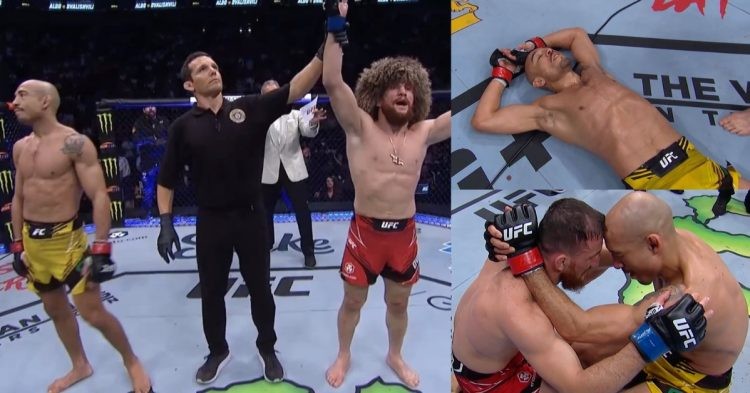 Former bantamweight champion Jose Aldo squared off against Merab Dvalishvili in a three-round bout at the recently concluded UFC 278 PPV. Going into this fight, the Brazilian fighter was on a three-fight winning streak and another win against a top contender like Dvalishvili would have most likely earned him a title shot.

However, Aldo suffered a one-sided unanimous decision loss as Dvalishvili dominated the matchup from start to finish. Following this tough defeat at UFC 278, it seems like Jose Aldo is hanging his boots from the sport.

While speaking to Ariel Helwani at the MMA Hour show, Aldo’s opponent Merab revealed that the 35-year-old bantamweight contender told him that this was the end of the road for him in the UFC during their post-fight conversation inside the octagon.

Merab says after their fight Aldo told him is retiring.#TheMMAhour pic.twitter.com/9kzVhFLU8A

“He told me actually when he was down. Then I go to shake his hand and I tell him thank you so much for the fight and then I go to respect the hand. He was down and I try to help him and then he was telling me this means that this is my last fight. He said it was my last run to title and he said I guess I’m done.”

So far Jose Aldo has not confirmed his retirement from the UFC after his loss. However, in the build-up of his fight against Merab, the Brazilian bantamweight had indicated that he might retire if he loses at UFC 278.

Given his age and the fact that he has to again win two or three fights before getting a title shot would take a lot of time. Therefore the likelihood of him calling it a day is very high and we can expect an announcement very soon.

Jose Aldo was on a great run and he was on the back of a brilliant unanimous decision win over Rob Font before colliding against Merab Dvalishvili. The former bantamweight champion’s rise to the top was ended by Merab and this loss left him heartbroken as he was hoping to contend for the bantamweight belt with a win at UFC 278.

The 35-year-old fighter left the octagon in disappointment and consequently, he started crying backstage. His wife Vivianne was seen consoling him following his heartbreaking loss. In the end, it is needless to say that Aldo will go down as one of the greatest fighters to have graced the sport of Mixed Martial Arts.