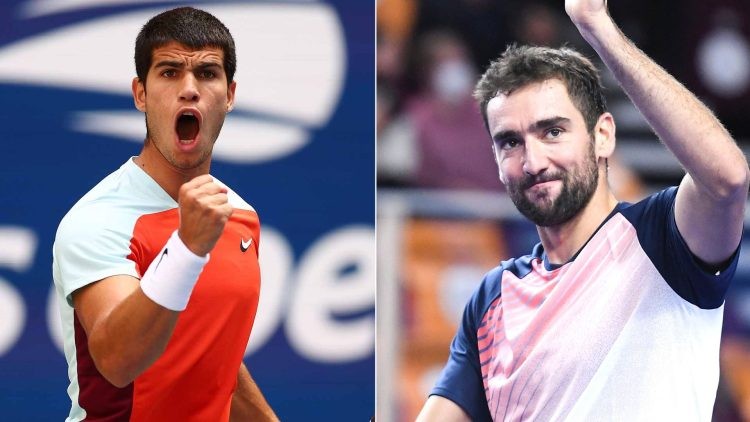 Carlos Alcaraz seems to have regained his momentum and his form in the ongoing US Open as he defeated the 2014 champion Marin Cilic in the fourth round in order to progress to the quarterfinals.

Alcaraz defeated the former world no. 3 through a 6-4, 3-6, 6-4, 4-6, 6-3 and reached the quarterfinals for the second consecutive time at the Flushing Meadows.

The match was long and tiring for both the players and it was officially the fourth longest match in the history of the tournament. Alcaraz in the post-match press conference stated that,

“Honestly, I have no idea,”

“It was pretty, pretty tough at the beginning of the fifth set [being a] break down. But Marin was playing unbelievable. I believe in myself all the time. Of course the support today in Arthur Ashe [Stadium] was crazy. Without you guys, it wouldn’t be possible to win this match tonight, so thank you very much for the support tonight, thank you.”

He thanked the crowd for the support he received and owed his performance in the fifth set to the audience present in the Arthur Ashe stadium.

Carlos Alcaraz fighting for the World No.1 spot after Nadal’s shock exit

Carlos Alcaraz and Casper Rudd are the two contenders fighting for the famed No.1 spot especially now that both Rafael Nadal and the current World No.1 are out of the tournament. Carlos Alcaraz is one of the favourites to clinch the title alongside Nick Kyrgios.

If Alcaraz wins his maiden title at the US Open, he would be guaranteed his No.1 spot in the ATP rankings. In his match against Cilic, there was a moment when Carlos and his fans thought that his hopes of a maiden grand slam title were fading away.

However, the young Spaniard bounced back and eventually went on to win the match. Carlos will next be facing the eleventh seed Jannik Sinner.

Carlos has lost twice against Sinner and he would surely be hoping for redemption this time around since the stakes for him have never been higher.