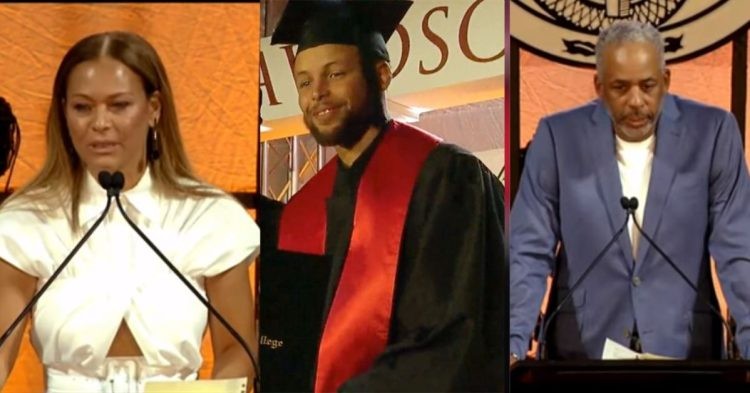 Stephen Curry and his parents Dell and Sonya (Credit- Youtube)

Golden State Warriors superstar Stephen Curry made his parents Dell and Sonya proud by finally graduating with a diploma and having his jersey retired in a Hall of Fame induction ceremony at Davidson college. We already knew that Steph was from Davidson and played there before applying to the 2009 NBA draft. People are likely to assume that he completed his graduation simply because he attended there.

However, NBA players rarely complete their full college course before declaring for the draft. Some prodigies are selected out of high school, while the majority make it within the first few years of college. Star life in the league is something few people can imagine and several players never really follow through with their education, even after their career ends.

Chef Curry has managed to complete his education. Moreover, he has done so in the prime of his NBA career. One must wonder how his parents felt about this accomplishment and how they reacted to him being honored in this unique manner by his college.

Curry is not a big NBA player. He was even smaller in high school entering college. Thus, he was not selected and recruited by the top basketball schools in the country such as Duke or Kentucky. Steph had absolutely no problem with this and showed loyalty to Davidson from the beginning. However, his mother revealed that she needed a little convincing during her son’s graduation and induction ceremony.

“This is a dream come true for me…”

“I wanted to just sit back and enjoy the moment because this is a dream come true for me. Our entire family has had some awesome, awesome memories here in this very space and arena… I pushed back on Stephen a little bit when he chose to come to Davidson because I wanted him to go to a high D level 1 school. I wanted him to get a little bit further away from home and he said Mom just come to school.. come and watch practice. And I was like alright.

She continued explaining what changed her mind, “The main thing that spoke to me was the joy that Stephen had. How comfortable he was in that practice. and told him if this is what you want to do we will support you and he chose Davidson. And I never saw him after that except for at basketball games”.

Watching a mother discuss how her son grew into a successful adult was quite beautiful. Later, Dell Curry shared a few words as well.

Dell Curry admits he is a lucky dad thanks to Steph

This was quite an emotional function for the Curry family as this is an accomplishment outside the world of basketball. Many of us already know that Dell is a former NBA player and so is Steph’s brother Seth. He shared how he felt about his son as a father.

It’s ALWAYS a great day to be a Wildcat.

There is no arguing that Stephen Curry deserves credit for his graduation. It speaks to his sense of values and commitments in this world. If there is one thing Curry has learned in the league and about life, it is getting the job done.