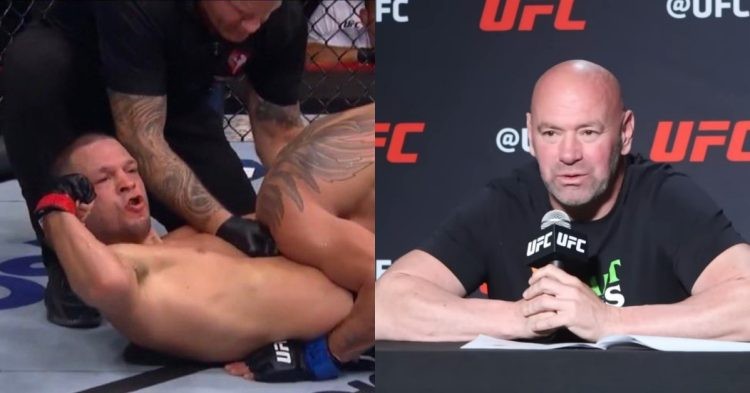 Nate Diaz just defeated Tony Ferguson in the main event of UFC 279. The two veteran fighters tore down the arena with an immensely entertaining fight. Although both fighters had moments of massive success in the fight, it was Nate Diaz who prevailed and got a submission victory in the 4th round.

After the bout, Nate stated that he will not renew his contract with the UFC and Dana White confirmed the same in the press conference afterwards. The UFC President stated that he had a conversation with Nate regarding the situation a long time ago. Dana held no grudge against Nate and wished the fighter well in his future endeavours.

“No matter what Nate does from here on out, I mean the kid, this is his house. He’s been here forever, it’s been a blast having him here and I wish him well. He and I had this discussion months ago at the offices.”

Nate Diaz will not be continuing with the UFC after UFC 279. It was well known that Nate wanted out of the promotion following the completion of the last fight on his UFC contract. After beating Tony Ferguson, Nate is now finally a free agent and he has chosen not to negotiate with the UFC any further.

After the fight, Joe Rogan asked him whether Nate sees himself in the UFC any longer or not. Nate stated that he wants to explore other combat sports, possibly hinting toward a debut in the boxing ring. There was a lot of speculation about Nate fighting Jake Pual in a competitive boxing match. Hence, his comments after the fight may be hinting at that.

“I wanna get out of the UFC for a minute and show all these UFC fighters how to take over and own up another sport, how you’re supposed to do it, cause Conor McGregor didn’t know how to do it and none of these other fighters know how to do it. So I’m gonna go out there (and), I’m gonna take over another profession and become the best at that.”

So it is very evident that Nate Diaz is on his way to boxing. He has certainly earned every opportunity that will come his way after UFC 279.

Nate finishes his UFC career with a record of 16 wins and 11 losses. However, he will always be remembered fondly as one of the most beloved fighters to ever compete inside the Octagon.

As Dana mentioned, Nate has a fight promotion (Real Fight INC) too. So taking some time off will also help him to focus all of his attention on promoting.

What do you think will Nate Diaz do next? Is he about to jump into boxing straight away? Or will he take some time off? Let us know in the comments down below.