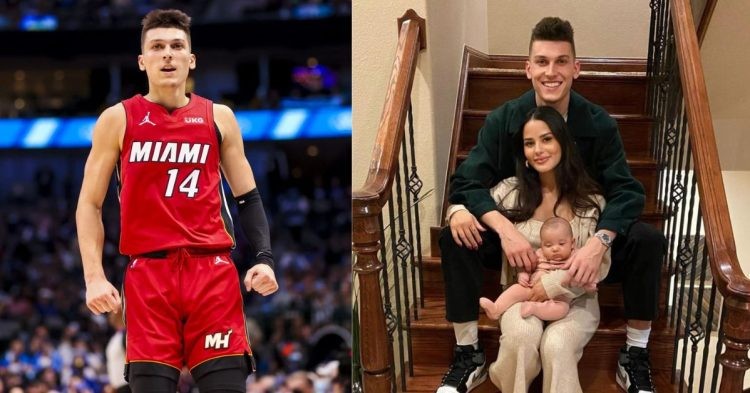 Tyler Herro is a 22-year-old guard for Miami and was drafted into the league in 2019. He has shown signs of potential and has already established himself as a full-fledged player. It would interest many people to know that Herro is already a father and expecting a second child at the young age of 22.

Most people haven’t completed their education or gotten their first solid paycheck by this point in their lives. Thus, being a father and having responsibilities is on another level. Herro was a guest on Youtuber Jake Paul’s show “BS w/ Jake Paul“. There he discussed what it was like having children and being a young dad.

Super Herro would undoubtedly be a really cool name to give Tyler’s unborn son. People are quick to name their children on impulse in this generation. Therefore, it would be prudent for the parents to take other name options into consideration.

We already know Tyler’s one-year-old daughter’s name is Zya Elise Herro and her mother’s name is Kataya Elise Henry. She is pregnant and the second child is to be born in January 2023. Herro discussed whether he was feeling a sense of pressure with a second child on the way.

“Nah it is it’s a blessing you know I had a daughter she’s almost 1 in a month she’ll be 1 then I’ll have my son in January so I’m excited about that….”. He also went on to explain the challenges of being a father at a young age. “No, it’s definitely different obviously I Still have my life and my career and stuff like that so my support system is good around me too to help me out“.

The Miami Heat star definitely made some valid points. In this day and age, people are having children before they are ready and that ends up complicating other aspects of their lives. It is somewhat common for  NBA players to have children at young ages. That list includes Steph Curry, LeBron James, Ja Morant, Jayson Tatum, and countless others not just Herro. Nonetheless, it does not mean any of them found it easy being both a father and a player.

Jake Paul’s girlfriend Julia Rose was the one who brought up the idea of naming the child Super Herro. Tyler seemed to like it. However, he claimed that the obvious idea never came into his head. We hope his son is born healthy and safe.