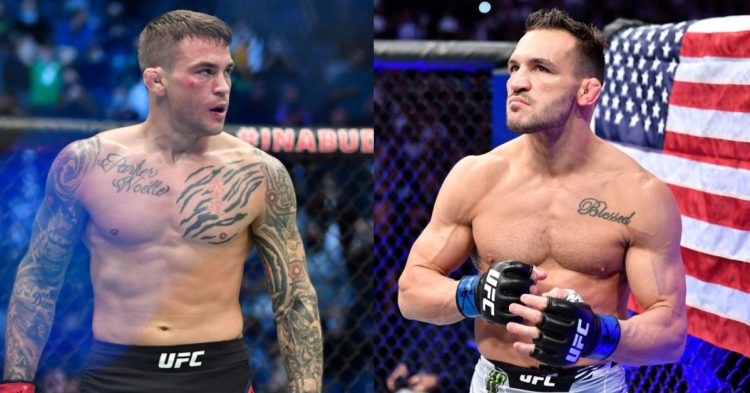 Fans have been waiting for the announcement of Dustin Poirier’s next fight for quite some time now. Poirier last competed in December of 2021, dropping a third-round submission loss to Charles Oliveira in a failed attempt to secure the UFC lightweight championship.

There were multiple reports that Dustin Poirier could face Nate Diaz, however, despite the repeated attempts from both the fighters on social media, the match-up never came to be. Then there were rumors of a potential fourth fight with Conor McGregor, however, Poirier was quick to shut them up.

Most recently, Poirier took a cheeky jibe at Michael Chandler following his win over Tony Ferguson. Since then, both the fighters have taken shots at each other.

A lot of names being said by Iron Michelangelo but I’m not hearing mine. Respectfully

Both the fighters were separated at UFC 276 after getting into a bitter altercation in the stands. Needless to say, the rivalry looks real, and it seems like we might finally see them settle their difference inside the Octagon.

In the past, Michael Chandler has stated that he doesn’t want to fight Dustin Poirier for the lack of respect he received from the former interim champion upon his arrival in the UFC.

Now, Brett Okamoto of ESPN reports that Dustin Poirier’s next fight could be against Michael Chandler, and it is Chandler who “wants the smoke”.

“Looks like it’s going to be Michael Chandler (@MikeChandlerMMA). Sounds like he wants the smoke and Dustin is going to give it to him.”

UFC hasn’t reached out yet, though.

There is no confirmation from both the fighters and the trash talk on social media has also gone down. Michael Chandler last competed inside the Octagon against Tony Ferguson at UFC 274, where he picked up a KO win over El Cucuy.

Dustin Poirier vs Michael Chandler is an exciting match-up between two of the most fiercest strikers in the history of UFC. Whether we will get to see them compete inside the Octagon against each other, only time will tell.