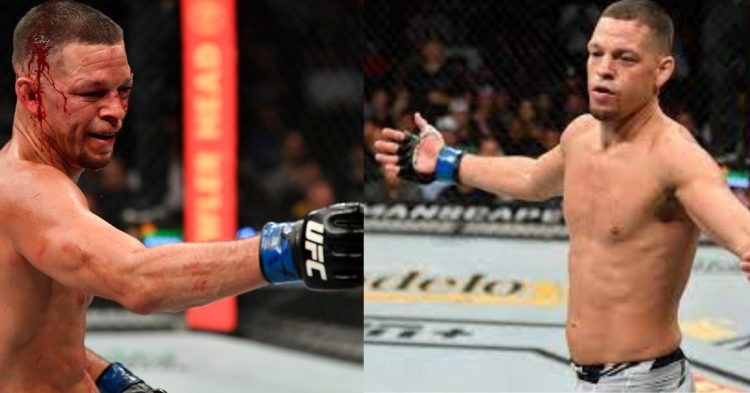 Nate Diaz is well-known in the MMA community, He is described as the “OG” for his larger-than-life personality of saying things how he sees them. In addition to being a huge fighting figure, he is a triathlete from Stockton, California, who loves to practise Gracie Jiu-Jitsu.

In the last half a decade, Diaz hasn’t seen much fighting success but he is still one of the most relevant figures in the sport. That’s why he is headlining a card in the fighting capital of the world, Las Vegas against Khamzat Chimaev. It is very rare to see that a non-title fight is being headlined in UFC these days but Diaz is an exception.

The native of Stockton has nonetheless made it seem he has plans that go beyond the Chimaev contest. Diaz was questioned about the prospect of signing a new deal with the UFC during the UFC 279 media day.

When asked if money is his top priority or if he has any more demands for the UFC, Diaz stated, “I feel like the UFC, it’s kind of limited for me. And I wanted to reach f**king higher goals, higher objectives, and do bigger stuff than this. under the UFC umbrella, it’s like I said, ‘You’re limited.’ You only go so far. And like I said, It’s the only halftime show.”

Recently, Dana White and Nate Diaz have gotten into a little bit of a tussle. The argument centred on Nate Diaz’s request for a fight at a specified time and UFC’s refusal to fulfil it. However, when Nate’s bout versus Khamzat was scheduled for UFC 279, things appeared to calm down.

He added, “I’m gonna do something bigger than I’ve ever done as soon as this is done; bigger than this, bigger than whatever’s in the past also.”

Regardless, what lies ahead in the future of Nate, it is clear that it will be as entertaining as it has been in the past with him. The fans can sit back and enjoy the show.

Nate Diaz could be hinting at a fight against Jake Paul. While, Paul in the past had expressed his desire to compete in boxing once more and requested that the UFC free the 37-year-old. Now that he has made his intentions clear, Diaz is prepared to take on any boxer from the squared circle. During an interview for the MMA Hour, Diaz responded to a question regarding a matchup with Paul.

He stated, “I’m interested in activity and if I get out and he is the first guy to step up then I am fighting him.” Paul had even submitted a proposal to UFC president Dana White to fight Diaz in his final match in order to free the star from his contract in exchange for yet another fighter pay review. However, since Diaz is still pushing for his release, a deal is unlikely to be reached.

Regardless, The fight between the two is a real possibility. It will spectacle for the sport and a treat for the fans. Given their backgrounds, It will be interesting to see who comes as the victor. Do let us know what you make of the match-up.