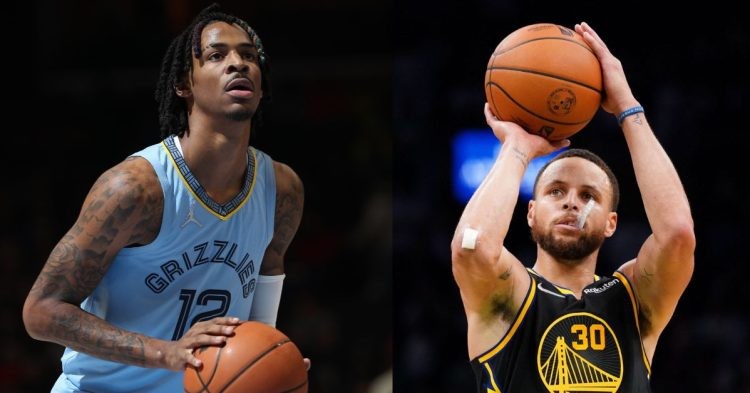 The 2022 NBA Playoffs had all the entertainment in the world. From young stars showing up on the biggest stage in the world, to Stephen Curry proving that he is still one of the best players on the planet, we witnessed it all. However, when it comes to clutch shots, not all of them could get it done. It will definitely be surprising to fans to learn that even Steph wasn’t the one to save his team the most.

This year, we saw younger players taking over. Stars like Devin Booker, Ja Morant, Jayson Tatum and Jaylen Brown, were all making the headlines day in day out. One player you definitely would have heard of is Memphis Grizzlies star Ja Morant. The 2021-22 NBA season was surely his best one till date.

In the playoffs this year, Ja played 9 games for the Memphis Grizzlies. That means he missed 3 games for the team. The reason for that would be the injury in his right knee. He missed Game 4 against the Golden State Warriors.

In those nine games, Morant proved that he was one of the best young players in the NBA. He averaged 27.1 points, 9.8 assists and 8.0 rebounds, together with 2 steals per game. This stat show that he stepped up for the Grizzlies when they needed him.

Ja Morant made the most Clutch Baskets in the 2022 Playoffs despite only playing 9 Games!! 🤯 pic.twitter.com/hHc3E9wHxX

The Golden State Warriors emerged as the champions last season, barely facing any real competition on the way if we’re being honest. The only teams to really give them a battle were the Grizzlies and the Boston Celtics in the finals.

As for Morant’s team, they lost the series 4-2. They were the only team to win two against the best team in the NBA. Let’s also not forget the fact that the Warriors had their formidable trio of Steph, Klay Thompson and Draymond Green.

If that wasn’t enough, they also had Andrew Wiggins and Jordan Poole at their disposal. It is quite acceptable for the Grizzlies to lose against such a talented team. However, they still gave them a run for their money, with Ja averaging 38.3 points, 8.3 assists and 6.7 rebounds in 3 games against the Warriors.