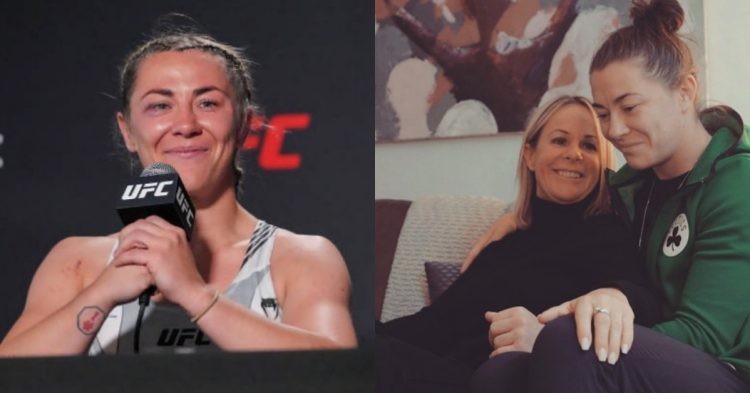 Molly McCann is a fighter in the UFC Flyweight division. She was the Cage Warriors flyweight champion in 2018. She had a bad start to her UFC career after missing weight on her debut and losing to Gillian Robertson. But she had bounced back in a major way and has a record of 5-3 in the company.

However, Molly McCann has become a big draw in the UK market. McCann who hails from Liverpool, UK, has a big fan following in the area. She has had 5 fights in Liverpool and has won 4 of them. Hence, the city is fully behind their hometown girl. She and Paddy Pimblett have become one of the most entertaining duos in the UFC.

After her recent main-stream fame thanks to her friendship with Paddy Pimblett, the fans are more than curious about Molly McCann’s personal life. So let’s take a look into her dating life and find who the lucky person is that Meatball is dating.

Who is Molly McCann’s girlfriend?

As far as her dating life is concerned, Molly McCann likes to keep her love life out of the limelight. However, she is a very proud member of the LGBTQI+ community. But at the moment, it looks like she is either single, or she wants to give her partner a bit of privacy by keeping their identity secret.

Molly McCann speaks on her sexuality

Molly McCann is not the one to stay quiet on any topic. She previously spoke about what it was like to be gay while growing up. The 32-year-old had a conversation with boxing promoter Eddie Hearn in April of 2022 where she spoke up about her sexuality. She revealed that despite living in modern society, she still gets abused for her sexuality.

“I struggle with being gay still, Eddie, do you know what I mean? It’s not nice for me to sometimes walk down the street and I’ll get abuse. It’s not really in the city that I am from but if you go somewhere and I hold my girlfriend’s hand, the looks that you can get and the abuse you can get it’s still quite traumatic to be honest.” (h/t via Liverpool Echo)

There is also a BT Sport documentary on Molly called ‘Meatball Molly.’ There she detailed that she was afraid to accept her sexuality. Molly knew about her sexuality very early on. But she ran from it as she was afraid of her religion and her society. That is where MMA helped. It gave her the outlet to express herself and it helped to give her the encouragement to come out at the age of 25.

It must not have been easy for Molly to come and talk about her sexual orientation in the public. But just like inside the Octagon, Molly is a fighter in real life as well. She has written a book on her coming-out story titled ‘Be True To You,’ which encourages youngsters to open up and talk about their sexuality without any fear.