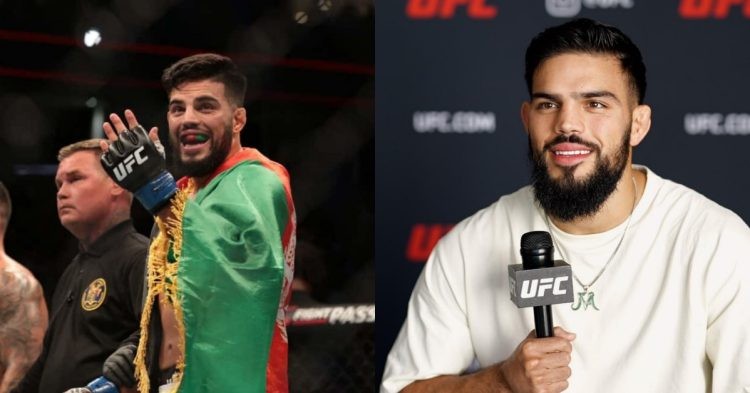 Nasrat Haqparast will have his second fight this year at UFC Paris this weekend. He will fight John Makdessi on the main card of the event. Following two back-to-back losses, Nasrat will have the chance to get back to winning ways this Saturday. However, he is disappointed that he will not be able to walk out with his home country Afghanistan’s flag.

As fans know, UFC has banned flags from its programmings. The act started taking effect from the UFC 274 broadcast. During that event, the company prevented the fighters from walking out with flags around their necks. UFC President Dana White confirmed the same in the post-event press conference. When asked about why the decision was made, White played coy.

However, it will stop Nasrat from being able to walk out with Afghanistan’s flag. During an interview with SportsKeeda, Haqparast let his disappointment known. But he also revealed that he was proud to represent Morocco.

“Actually we are not even allowed to bring in physical flags, but the show is going to show the Moroccan logo because I’m not allowed to use the Afghan flag. I don’t know the reasons behind this, maybe something political or something, I don’t know… I need to follow the rules.”

“Of course, [it’s] very heartbreaking because Afghanistan has a crazy history, it’s very very sad to see, especially the last year was very tough and now I cannot represent the flag… But Morocco is now my second home and I’m very proud to represent Morocco because also we have very similar culture. The people are very similar. So I see us all as brothers, as a big community…” (h/t via SportsKeeda)

UFC has had past incidents when fighters chose to walk out with flags which caused controversy. For example, Belal Muhammad represented the Palestinian flag in a recent event and It put the company in an uncomfortable position. Hence, to avoid such situations in future, UFC has perhaps decided to take the step.

It helps them to maintain a non-political stance and be diplomatic. However, UFC has not confirmed it and it is pure speculation.

As mentioned above, Nasrat Haqparast has lost both of his last two fights. There was a lot of hype behind his UFC debut. He trains out of Tristar Gym and the MMA fans know the importance of that gym. Not only is it home to acclaimed trainer Firas Zahabi, but that is also the gym where GSP trained for the second half of his career.

Firas was given a lot of credit for turning Georges St-Pierre into one of the most well-rounded fighters. So having a coach like Zahabi is certainly an advantage to him. GSP also was present at Nasrat’s corner during one of his UFC fights. However, with a record of 5-4, his run in the UFC has been a disappointment.

But Nasrat Haqparast is only 27 years of age. So there is ample time for the lightweight fighter to turn his career around. Charles Oliveira and Michael Bisping are the biggest examples of fighters who did not have the best initial run in the UFC and ended up becoming the champ in their own divisions.

So he will certainly have the chance to recover from the slow start. Beating John Makdessi at UFC Paris is a big step towards that.