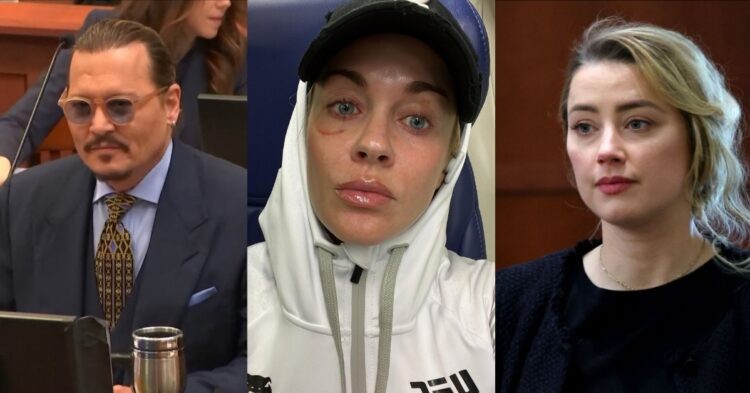 The Johnny Depp and Amber Heard trial has taken the world by storm. It seems like the Mixed Martial Arts (MMA) world is not safe from its grasp either. UFC women’s bantamweight Raquel Pennington got mixed up in the proceedings a few days ago. Now it seems like Laura Sanko has also found herself in hot waters.

The former Atomweight fighter is a part of the UFC broadcasting team. She often conducts the backstage interviews after the fighters come out of the Octagon. Hence, she always maintains a good appearance for the camera. Laura recently posted a photo praising the UFC make-up artist for hiding a bruise on her face.

Being a former fighter herself, Laura Sanko is always in the gym to hone her skills. But during a sparring session with one of her teammates, Sanko suffered a black eye just before last weekend’s UFC Vegas 55. But her makeup was on point which covered the bruise perfectly. In her post on Instagram, she made a joke which made a reference to Amber Heard’s ongoing trial.

As a result of the joke, Laura suffered a severe backlash from the fans. A lot of them accused Heard of supporting domestic violence indirectly. However, Sanko denies the claims outright and explained that she had no such intention. Laura also made it very clear that she is not picking a side during the ongoing court case. She wrote,

“I have no opinion on who’s telling the truth or who’s right etc because I haven’t been watching to form an educated opinion. I don’t need to watch it to have at least one opinion though: DV whether inflicted by a man or a woman is awful.”

It certainly did not seem as if there was any malicious intention behind Sanko’s initial post. She just wanted to highlight her friend’s good work. The reference to Amber Heard was purely a tongue in cheek moment. But she perhaps misjudged the gravity of the situation.

The current case involves two of the biggest celebrities in Hollywood. Both Johnny Depp and Amber Heard have massive followings worldwide. Hence, any comments from a person of note will be construed in a way which fits their narrative. Hence, Laura Sanko got caught in a crossfire between two opposite parties with different perspectives.

But the 39-year-old once again reiterated that she condemns any kind of violence regardless of gender. What do you think of the situation? Were Laura Sanko’s comments taken out of context? Or the backlash she faced, was justified? Let us know your take in the comment section below.