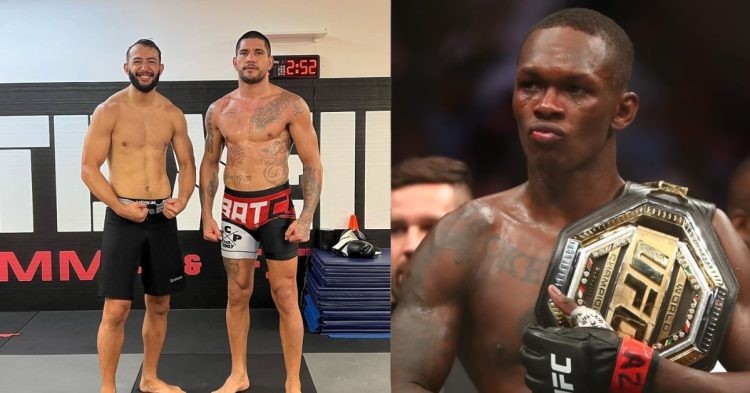 UFC 281 will go down inside the Madison Square Garden (MSG) on November 12th. In the main event, UFC middleweight champion Israel Adesanya will fight his kickboxing rival, Alex Pereira. While Izzy is not a small guy by any means, it looks like Pereira will have a significant size advantage on him.

In a recently surfaced picture, Pereira was seen posing alongside former two-time light heavyweight title contender Dominick Reyes. But, to everyone’s surprise, it seemed like Dominick was the smaller fighter between the two. With just over two months to go, Alex is in incredible shape and looks like he is way over 200lbs at the moment.

There is a saying that a picture is worth a thousand words. It is certainly true on this occasion. As the fans know, The Last Stylebender and Pereira fought each other twice in kickboxing. The Brazilian emerged victorious on both occasions and the second was especially memorable as it came via knockout.

There is no doubt that Pereira is the more powerful fighter. So the size difference may play a part in their eventual showdown inside the Octagon. Both Adesanya and Pereira are 6’4 ft tall, but what sets them apart is their physique. While Adesanya is on the leaner side, Alex is much more muscular. It may also explain the power difference between them.

As evident by the picture above, Israel Adesanya is set to face a physical beast inside the Octagon in November. But this is not the first time that Adesanya is going up against a powerful striker. Previously, Israel has beaten the likes of Yoel Romero, Paulo Costa and Jared Cannonier. Adesanya is a master of evading power punches and implementing his game plan.

But Pereira is different as he is also a sophisticated striker on top of being a power puncher. During their last kickboxing fight, Adesanya dominated a large portion of it. But all it took Pereira was one opening to find the perfect shot and it put Izzy’s lights out. Even in his last UFC fight, Poatan knocked out Sean Strickland as soon as he got the chance.

Alex will aggressively pursue a knockout and he will push the pace as soon as he senses weakness. On top of that, seeing the impeccable shape that Alex is in, has made the fans think that he will maintain his win streak against Adesanya at UFC 281.

Here are some notable Twitter reactions to the photo.

Reyes isnt even a small lhw. How tf does this dude make 85😂

He can definitely be double champ

He’s a natural heavyweight. He’s probably 225 in this photo

This guy bigger than bunch LHW’s 😭

damn i didn’t know they were training together, izzy and spann are fucked 💀

He looks taller and bigger than Reyes. Izzy if fucked

What are your thoughts on the matter? Do you think the size difference between the two will play a factor in the fight? Or will Israel Adesanya finally overcome Alex Pereira and complete his 6th middleweight title defence? Let us know in the comments down below.