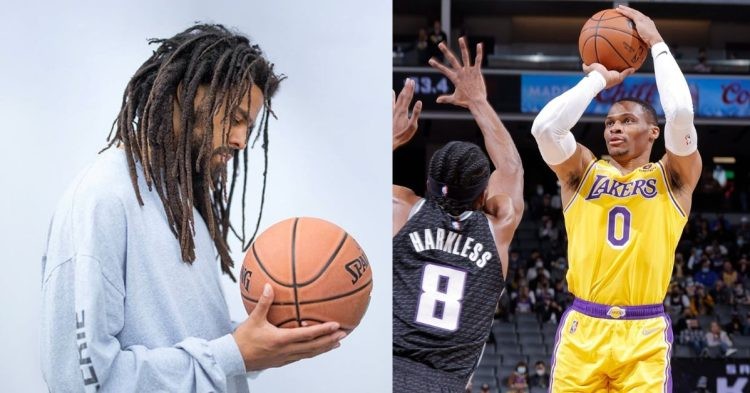 We already know that the NBA 2K creators are strict when it comes to ratings. However, they seem to have taken it too far in NBA 2K23. Los Angeles Lakers point guard Russell Westbrook just had one of the worst years of his career. Therefore, the creators decided to give musician and rapper J Cole a higher 3-point rating than Westbrook.

At first sight, it would be ridiculous to compare a rapper and a professional NBA player. Let alone decide the rapper was better at basketball. One must wonder how bad Russ did last year from the three-point line and how good a shooter J Cole is. This will help decide if NBA 2K23 got it right.

J Cole might just be a better shooter than Russell Westbrook

J Cole is a huge fan of the NBA. He has been seen at several events over the years. Moreover, he participated in the 2019 dunk contest. His mere attempt proves he is no ordinary basketball player. Additionally, we have footage of him knocking down back-to-back three-pointers from 2019. If he has worked on his game over the years, giving him a 71 3-point rating on NBA 2K23.

Russell Westbrook has been clowned for his performance this year and anointed by NBA analysts with the name “Westbrick.” This has enraged him. But, perhaps they are speaking harshly due to his shabby numbers this season. Westbrook averaged only 29% from the three-point line this season. Additionally, he made only 66.7% of his free throws.

The NBA 2K23 creators seem to have held this harshly against the Lakers’ guard. He has been given a  64 3-point OVR, a whole 5 points below J Cole. In Russ’ defense, we have no idea how J Cole would perform if he were conditioned enough to play long minutes on an NBA court. It is really not fair to Westbrook and we hope he doesn’t feel disrespected.