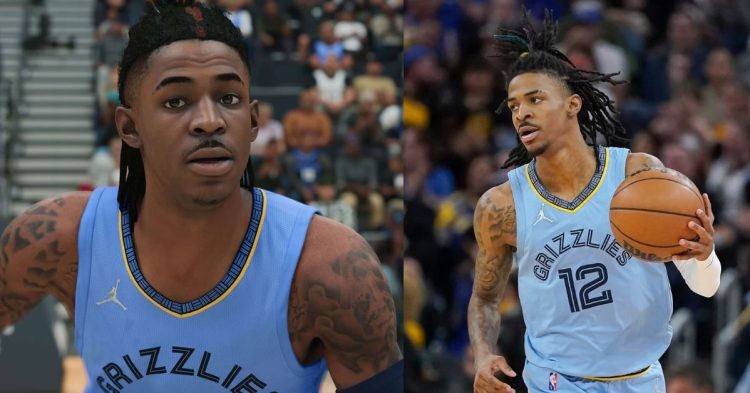 Ja Morant is the young and explosive point guard for the Memphis Grizzlies. He entered the NBA in the 2019 draft alongside Zion Williamson. Zion’s career may have initially slowed down due to injuries. On the contrary, Ja has gotten off to nothing but an excellent start, proving himself to be a budding superstar.

Morant has made the Grizzlies relevant again in the few years he has spent there. His playstyle and skillset draw admiration and awe from fans across the world. One must wonder what the Memphis Star’s ratings are like on NBA 2K23. He might be of young age. However, that should not hold the game creators back from considering him to be one of the best players in the league.

Ja is definitely on his way to becoming one of the most popular players in the NBA. He has everything a budding superstar needs. From unreal athleticism to the clutch gene, Morant has it all. He carried his team to the second round of the Western Conference Finals this year. However, the Grizzlies ended up losing to Stephen Curry and the Golden State Warriors within 6 games.

We are quick to forget that the Grizzlies series was one of the toughest for GSW these playoffs. Only Memphis and the Boston Celtics were able to force the Warriors to 6 games. Moreover, unlike the Celtics who were healthy, Morant was injured during game 3 of the Grizzlies- Warriors series and sat out the rest.

Therefore, we can never really know what would have happened if Ja had been healthy. If the Grizzlies forced a Game 7, it was quite possible they stunned GSW and won the series. After all, they had homecourt advantage for the series.

Nonetheless, that is not what happened and the Warriors moved on. That does not mean Ja is any less of an unreal talent or superstar in the league. Therefore, the NBA 2K23 creators decided to give him a rating of 93. There are only a handful of players the game considers to be better than Morant.

Some of them are Giannis Antetokounmpo, Kevin Durant, LeBron James, Stephen Curry, Joel Embiid, Luka Doncic and Kawhi Leonard. This is a distinguished company to be included with. We are sure Ja will establish his place among them in the years to come.