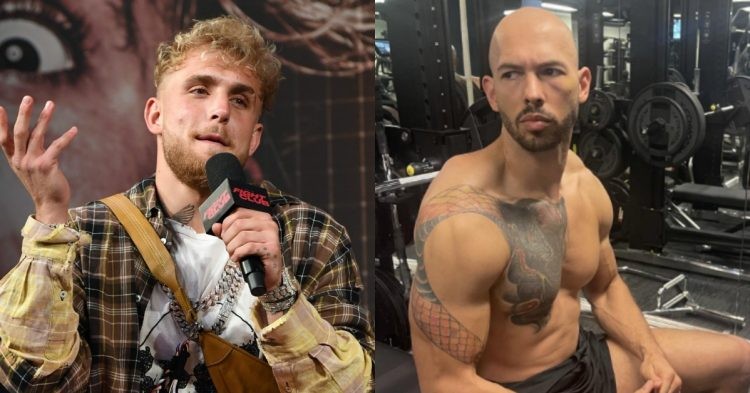 Jake Paul speaks out about Andrew Tate. (Images via Twitter)

Jake Paul finally breaks his silence about possibly fighting Andrew Tate next. In a recent appearance on his brother Logan Paul’s podcast, IMPAULSIVE, he stated that Tate does not really want to step inside the ring with him despite recent developments.

Just days after the news broke that Jake’s much-talked-about fight with Hasim Rahman Jr was cancelled, links emerged of a fight with Tate. Although Tate’s representatives dismissed the initial rumours, the man himself was quoted confirming that there were indeed some negotiations going on for the bout to happen.

But The Problem Child does not believe the 35-year-old is serious about fighting him. Although Tate has been calling out Jake since 2020, the latter thinks Tate, who is a former kickboxer, does not want to risk his credibility by boxing Jake in a sanctioned bout.

“Nah, I don’t think he’d fight us.” Jake Paul continued, “and he called me out like 2 years ago and I remember seeing it. I was just like ‘swipe up, okay, who the f**k is that guy? (I) don’t care. That’s when everyone was calling me out.”

“And then some interviewer recently asked me like, would you fight Andrew Tate? And that’s when I (had) seen the guy starting to f**king pop up all over the internet. Oh, that’s Andrew Tate.”

“But what I’m saying is that ‘Andrew, if my brother doesn’t f**k you up, I will and it has to go down!’ But I don’t think he gets in the ring with one of us.”

Jake Paul thinks Andrew’s whole gimmick is based around being the ‘alpha male.’ So a loss to either Jake or Logan will be catastrophic for Tate’s social media empire. But Paul seems like he is open to fighting Andrew.

Not only Jake Paul, but Logan Paul also wants to fight Andrew Tate. Logan Paul recently had a brief stint in the WWE and had a great pro-wrestling match at Summerslam. However, Logan put out a statement following the contest stating that he wants to become a boxer once again and fight in the ring.

During his conversation with Jake, Logan stated he wants to fight Andrew on behalf of his younger brother. In comparison to Jake, Logan’s boxing career has not been very successful. His only pro boxing bout came against a fellow YouTuber by the name of KSI. Despite a close contest, Logan ended up losing the bout via judges’ decision.

Even Jake seemingly gave his blessings to Logan to pursue a fight against Andrew. So it will be very interesting to who ends up fighting Andrew Tate between the two brothers. But, without a doubt, a fight against Jake Paul will do much better business than the bout against Logan Paul.

Although Logan’s exhibition boxing match against Floyd Mayweather was a big success, it was mostly because of Mayweather’s fan following. To be fair, Tate also has a big fan following due to his social media presence. Hence, there is potential for big business with either Jake or Logan.

Who do you think will fight Andrew Tate next? Do you think the talks of negotiations with Jake Paul’s camp are legit? Or will Logan Paul swoop in at the last moment to fight the former kickboxer? Let us know about your take in the comments down below.