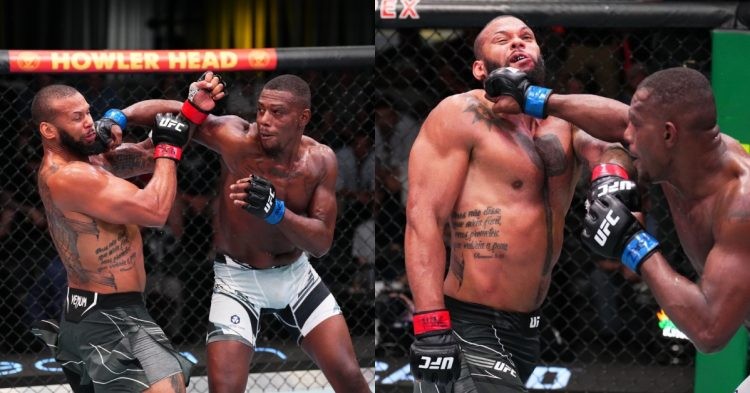 Rising contender Jamahal Hill fought veteran Thiago Santos in the main event of UFC Vegas 59. Hill knocked out Johnny Walker and Jimmy Crute respectively in his last two fights. Santos, on the other hand, had lost 4 of his last 5 fights. Hence, Santos needed to win to remind the fans that he is still one of the most elite fighters in the division.

Despite his recent bad form, Thiago Santos has racked up a lot of spectacular knockout wins. With 11 KO/TKO wins, Marreta is one of the most feared strikers in the UFC regardless of the weight class.

Will we go a perfect 🔟 for 🔟 on finishes at #UFCVegas59?@TMarretaMMA vs @JamahalH make the walk to find out now!! pic.twitter.com/M7095I9p4R

However, Jamahal Hill is known for his fearless approach in the Octagon. He always pushes the pace on his opponents and his knockout wins over OSP, Walker and Crute are a testament to the insane power that he possesses. Who emerged victorious in the battle of two power punchers? Let’s find out.

Thiago Santos took advantage of Jamahal Hill’s wide stance with some early leg kicks. He even tried to take Hill down in the very first minute of the fight. Santos did not rush in like he previously used to do. Instead, he waited for Hill to start moving forward in order to attempt another takedown. Although Santos did not get it, he pinned Jamahal on the fence.

But the clinch was broken up after Hill landed an illegal knee to Santos’ groin. The bout started to heat from that point as both Hill and Thiago started to open up. The last minute of Round 1 saw both fighters loading up to land massive, potentially fight-ending strikes.

Those boys were SWINGING in the second round 💢 #UFCVegas59 pic.twitter.com/l4O8IPGGRc

Hill opened up round 2 with some hard leg kicks as Santos seemed flat-footed in the opening seconds. But Santos fired back with a few jabs, body kicks and a flash takedown. Hill was up immediately, but Santos did well to maintain the clinch. But Sweet Dreams broke off the position and started to swing for the fences.

The Brazilian seemed to take a page out of his opponent’s book and started throwing haymakers. Round 2 ended with both fighters landing big punches on each other. The flurry from both fighters took a lot of their cardio. Thiago especially seemed exhausted as he seemed to have no interest in striking.

He shot for a takedown straight away at the beginning of round 3 and spent all his energy to keep Hill on the fence. Although Santos could not do any significant damage initially, he did enough for the ref to allow the exchange without breaking off the position. With 50 seconds to go, Jamahal got out of the clinch momentarily before being pinned on the fence once more. Santos ended round 3 on top.

SWEET DREAMS ARE MADE OF THIS! @JamahalH closes the show on a HISTORIC #UFCVegas59! pic.twitter.com/9xuVa7jw3u

Round 4 started with both Santos and Hill exchanging big strikes. But It was Hill who had more juice left in his tank as he hurt Thiago with some wild punches. Although it seemed like Santos might survive, Hill dug deep and made sure that the ref stepped in to stop the fight. With the win, he is set to move up the ranks and called out Jiri Prochazka and Jan Blachowicz.

A message from @JamahalH to the rest of the LHW division 🗣 #UFCVegas59 pic.twitter.com/YHzl0lUvhS

Hill has now shown that he can push the pace despite being tired and he is ready to take the next step in his career. Although he may not get the title shot next, a big fight is surely next for Jamahal.