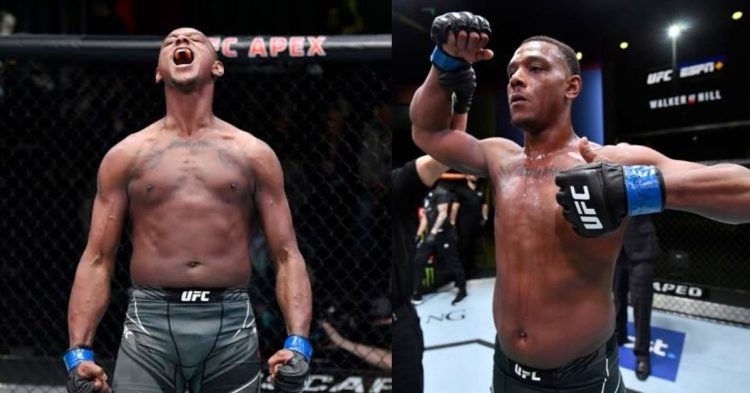 Jamahal Hill made his entry into the UFC after earning a contract by impressing the UFC President Dana White in the DWCS by knocking out his opponent Alexander Poppeck in 2019. Thereafter the light heavyweight contender made an instant impact in the division with his terrific striking skills.

Sweet Dreams has won four out of his six fights in the UFC so fat. From those five wins, Hill has finished three of his opponents via KO/TKO. His finishing rate goes to show that he has destructive power in his hands and has the ability to put them to use at any given moment.

Currently, Jamahal Hill is #10 in the 205-pound division. It is needless to say that he has great potential but he has a long way to go as he needs to defeat several tough contenders who are ranked higher than him in the division to emerge as a superstar.

Consequently, Hill will now face his toughest challenge in the UFC this weekend as he headlines the UFC Fight Night event against Thiago Santos in a five round bout. However, let’s shift the topic from his upcoming fight and take a look at his UFC career earnings.

Jamahal Hill made his UFC debut in January 2020 against Darko Stosic on the main card of UFC Fight Night: Blaydes vs Junior Dos Santos. Sweet Dreams put on a striking masterclass and defeated Darko via unanimous decision.

After a close first round, Hill pushed the pace and landed a barrage of shots to stun OSP. He kept on punishing the veteran and ultimately the referee intervened and stopped the fight. For this big win, Sweet Dreams collected a total of $75,000. Along with the win bonus,  Jamahal Hill received 20% of Ovince’s fight purse as he failed to make weight.

Following his brilliant performances, he made his first appearance on the main card of a PPV as he took on Paul Craig at UFC 263. Unfortunately, his winning run in the UFC came to an end as Craig broke Hill’s arm in a submission attempt and finished him with several ground and pound shots.

Jamahal received $32,500 from this fight including the incentive pay. After his brutal loss, Sweet Dreams made his return inside the octagon in December 2021 against Jimmy Crute. The light heavyweight prospect bounced back splendidly as he knocked out Crute in the first round and subsequently, he earned a performance bonus for his terrific striking display.

So far Jamahal Hill has reportedly earned $403,700 from his six UFC fights. It is needless to say that Sweet Dreams will go on and earn a lot more if he keeps on winning fights. It is to be noted that all the above-mentioned amounts are an estimate and are reported by sportsdaily.