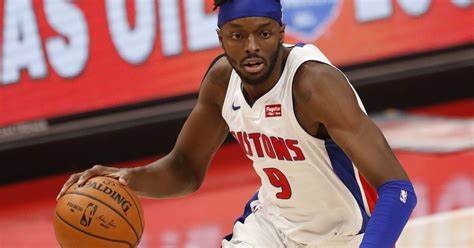 Jerami Grant is the small forward who plays for the Detroit Pistons in the NBA. The 27-year-old was chosen to be a part of the 12-man Team USA roster for the 2021 Olympics. This is the first time that Jerami Grant has been chosen to represent the US in the Olympics. The star finished the 2021 season with 22.3 points, 4.6 rebounds and 2.8 assists per game. However, Jerami Grant might not make his Olympic debut.

Team USA began training in Las Vegas. The star-studded roster suffered two major setbacks when they lost their first two exhibition matches against Nigeria and Australia. The team somehow bounced back in the next game but suffered a huge blow when Bradley Beal was ruled out of the Tokyo Olympics for testing positive for COVID.

Just as the team was preparing for their last two exhibition games, they suffered yet another blow. The Detroit Pistons guard, Jerami Grant was placed in the COVID-19 health and safety protocols. It is still unclear as to how much time the Detroit Pistons star will require to recover and join the team again.

The Tokyo Olympics protocols state that any athlete arriving from outside Japan must have two negative COVID tests. The tests need to be done on separate days. One within 96 hours of departure and the other within 72 hours.

Jerami Grant played eight minutes during the exhibition match against Argentina. He put up three blocks. He also started for Team USA against Australia but was on the court only for thirteen minutes. Grant put up five points with three rebounds and three assists, shooting 2 for 5. Against Nigeria, Jerami Grant came off as a bench player to put up six points in 17 minutes.