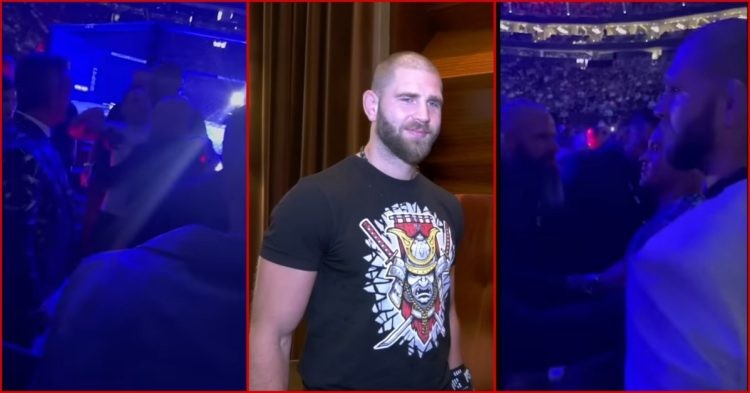 Dustin Poirier and Michael Chandler were involved in a heated argument at the recently concluded UFC 276. While the two fighters were shouting at each other, many tried to hold them back. Amongst the crowd, was the UFC Light Heavyweight Champion Jiri Prochazka. In a recent interview with Helen Yee on her YouTube channel, Jiri spoke about the brawl.

The incident was caught on camera and it was Poirier who did the majority of the talking. But the reason behind the whole exchange was unclear and there was no clear answer as to who started the whole thing.

But the 205lbs champion finally revealed that it was indeed Dustin Poirier who yelled at Michael Chandler first. Talking about the whole fiasco, Jiri Prochazka said,

“I was closest to as I can next to Dustin and he started to be aggressive to talk some trash-talk for Michael. They start to talk together. Nothing was surprise to me. I saved them.”

Dustin and Chandler have not been on good terms since the latter’s entry inside the UFC. Chandler has accused Poirier of playing down his prior accomplishments, while The Diamond has alleged that Michael is trying to avoid him and aim for other easier fights in the division.

Although Dana White previously stated that Chandler vs Conor McGregor was the fight to make, the UFC may very well take advantage of the recent scuffle and book a fight between the two first.

When is Jiri Prochazka fighting next after beating Glover Teixeira at UFC 275?

Jiri Prochazka and Glover Teixeira had an all-time classic title fight at UFC 275. It was a brutal back and forth that nearly went the full distance. Despite emerging victorious in the end, Jiri was pretty busted up after the fight.

However, his bruises and scars seemed to have healed nicely. As per public knowledge, he did not suffer any major injuries in the fight. Hence, he should be okay to make a relatively quick turnaround.

Among the major candidates for a crack at his title, Jan Blachowicz is perhaps the best choice. Jan is from Poland and Prochazka hails from The Cezch Republic.

Hence, it will be a huge fight for the European territories. Both of them have expressed their interest in the fight as well. As a result, making it happen will not be a big problem for the company.

However, Jiri also commented about Israel Adesanya‘s masterful performance against Jared Cannonier at UFC 276. Adesanya has stated he does want another chance to fight for the 205lbs belt. Although he is set to fight Alex Pereira next, Prochazka vs Adesanya can be a very interesting contest to behold in the future.