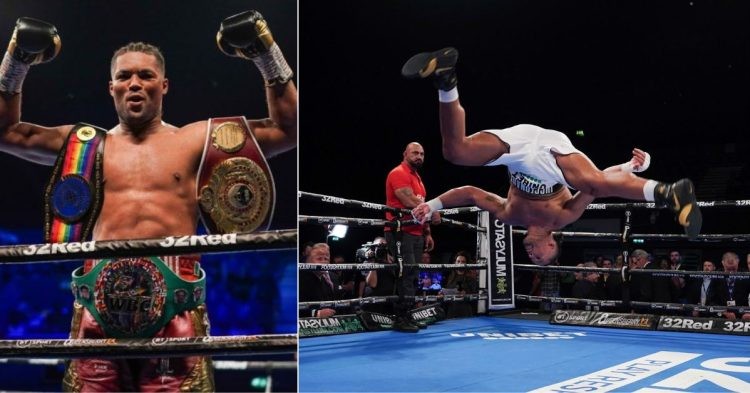 Joe Joyce stops Christian Hammer in the fourth round to win the WBC title eliminator in a triumphant return to the boxing ring. In the process, Joyce successfully defended his WBC Silver and WBO International heavyweight titles to maintain his undefeated streak. He will now look to challenge for the world title next.

However, it was Joyce’s celebration after the victory that surprised boxing fans around the world. Needless to say, it goes on to prove the British boxer’s flexibility as a heavyweight.

Currently, as it stands, WBC heavyweight title should be vacant, following the retirement of Tyson Fury. The Gypsy King held the WBC and The Ring heavyweight titles and called his retirement from boxing earlier this year after a knockout win over Dillian Whyte.

The British boxer was once again at his absolute best, showing great resilience and power punching to get his hand raised. Despite a tough first-round which saw Joyce eat several significant strikes, the former Olympic champion was able to dismantle Christian Hammer with his precision and power.

💥 An all-out body assault from @JoeJoyceBoxing sees him brutally take apart Christian Hammer in the fourth round.

Sustained damage from Joyce finally paid dividends in the end. Combined with vicious body shots, it proved to be too much for Hammer who suffered the first fourth knockout loss of his professional career.

While Joe Joyce was the favorite going into the fight, it wasn’t an easy road for the Juggernaut. Having fought the likes of Tyson Fury, Alexander Povetkin, Hughie Fury, and Luis Ortiz among several other notable names, Christian Hammer proved to be quite a test for Joyce in the first round.

Be that as it may, Joyce once again muscled through with his toughness and relentless pressure to slowly dismantle Christian Hammer to pick up the victory.