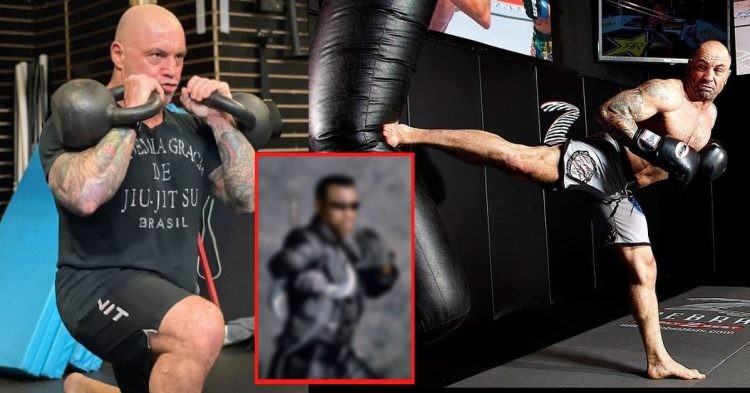 Joe Rogan is indeed one of the biggest media personalities in the United States of America. Host to the world-famous podcast, The Joe Rogan Experience, stand-up comedian, and UFC commentator is somehow always in the headlines.

Be it his interesting views alongside his fellow guests on his show, or his thoughts on UFC and the fighters, Rogan has always been a pivotal figure in the world of entertainment and sports. While he currently enjoys his time as a UFC commentator; a job he says he will leave after UFC President Dana White bids adieu, there was a time when Rogan was more interested in stepping inside the Octagon than being outside of it.

In a recent video by Bad Guy Chael Sonnen, the former UFC title challenger shared his thoughts on the time when Joe Rogan announced to the world that he wants to compete inside the Octagon.

Back in 2005, Joe Rogan and Wesley Snipes for into a heated back and forth for reasons still unknown. However, the back and forth came to a point where Wesley challenged Rogan to a fight inside the cage. Rogan, who as we all know is an MMA fanatic and a black belt in BJJ himself, immediately accepted the offer and even trained for five months straight. Alas, Wesley pulled out of it at the last minute.

15 years later, Chael Sonnen once again reminded fans about the entire scuffle and how much he wanted that fight to happen. “Joe Rogan is the Biggest Guy in America.” Sonnen continued, “Joe was there in the black shirt and he put his plea, out to the audience. This is before social media right, Joe would get that fight if he did it today. He was trying to fight Wesley Snipes but Joe came to you and said, hey guys talk to Wesley get him in there.” Chael Sonnen said. (3:00 forward)

“He realized I was going to choke the s**t out of him.” Rogan knew what needed to do. “Grab that guy and choke the f***ing life out of him.” Now, that’s saying something.

Sonnen opined how if Rogan had made the plea today in the world of social media, there was a huge possibility that we could have seen that fight.

There were reports at the time that Wesley Snipes wanted to make a quick buck to pay off his $23.5 million debt to the IRS. It’s safe to say, Wesley must have realized Rogan is a true MMA fanatic and with BJJ experience behind his back, it was asking for damage for the stand-up comedian.