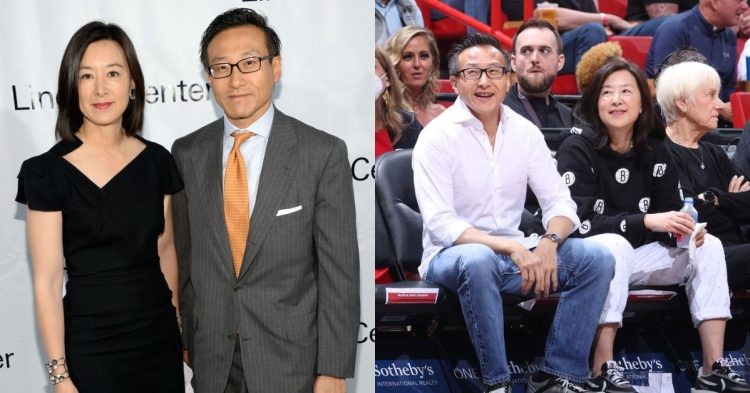 There are many NBA team owners to have been extremely involved with the franchises they own. One such individual would be Joe Tsai. He is the owner of the Brooklyn Nets, who boast a star-studded lineup, including the likes of Kevin Durant, Kyrie Irving, and Ben Simmons.

Joe Tsai has been spotted in many of the Nets’ games. We have often witnessed him rooting for them while sitting on the sidelines. Despite seeing him often, not many know the history behind the man. Joe was born in Taipei, Taiwan in 1964.

His wife, Clara Wu Tsai is also in the corporate industry. Clara is a co-owner of the Nets franchise, together with the New York Liberty in the WNBA. In addition to that, she is also an owner of the San Diego Seals and the Las Vegas Desert Dogs in the National Lacrosse League (NLL). Clara co-owns all of the sports teams along with her husband Joe.

Clara completed her Bachelor’s degree in Arts at Stanford University, together with a Master’s in International Affairs. She graduated in 1988. Five years later, Clara received her Master’s degree in Business Administration from Harvard University. On the other hand, Joe has an Economics and East Asian Studies undergraduate degree from Yale University. He has also completed his law degree from Yale Law School.

Clara has welcome three children during her marriage with Joe, whom she married in October 1996. Their children are Dash, Jacob, and Alex. All three of their children are lacrosse players and are talented in their playing careers.

Dash Tsai, son of @joetsai1999 with a nifty backhander to extend the @hklacrosse lead to three.

According to Forbes, Joe’s net worth is $7.9 billion, as of November 2022. Tsai is the cofounder of the Alibaba Group, and the executive vice-chairman as well. In addition to that, only founder Jack Ma holds shares worth more in the entity compared to Tsai. Jack Ma, who was working from a tiny apartment in Hangzhou, China, met Tsai in 1999. It is reported that the latter quit his job that paid a reported $700,000 a year to work with Ma.

When did Joe Tsai buy the Brooklyn Nets?

In 2009, Mikhail Prokhorov bought the Brooklyn Nets. Mikhail is a Russian-Israeli politician and businessman. Reports say that he paid close to $400 million to buy the New Jersey Nets. The Russian oversaw the franchise’s move from New Jersey to Brooklyn.

He also ended up buying some of the Barclays Center to make it the home arena. Then, the Brooklyn Nets were born in 2012 officially, and the team officials changed the colors to black and white.

The Russian billionaire was the single owner of the franchise for almost a good decade. Their best-ever finish was the Conference Semifinals. It seems like Prokhorov could not lead the franchise to an NBA final appearance. In 2018, Joe Tsai entered the conversation. The Canadian billionaire bought 49% of the Brooklyn Nets from Prokhorov in 2018.

“As a lifelong sports fan, I am very proud to join the Nets ownership and the NBA family. I lived in New York in the early days of my career and the City holds a special place in my heart. I share the vision and culture that Mikhail Prokhorov, CEO Brett Yormark, General Manager Sean Marks and Head Coach Kenny Atkinson have put in place, and I look forward to being part of this great franchise,” Tsai said in a statement.

Just a few months later, Joe bought the remaining 51% stake from Prokhorov. It seems like the ambitions he had for the Nets franchise were quite large. According to various reports at the time, Joe Tsai paid about $3.4 billion for the entire purchase. It is unknown how much each stake cost, but around $2.3 billion is said to be for the franchise. Tsai paid the $1 billion for the Barclays Center.

How did Joe Tsai’s purchase of the Brooklyn Nets affect the NBA?

The money that Tsai paid for the Nets was the highest paid for a sports franchise. However, his purchase’s impact was much bigger. Joe Tsai has involved himself well with the NBA and the relationship it has with China. As we all know, the NBA generates huge amounts of revenues from the Asian country. It all started with a Washington Bullets game that took place in 1979.

Slowly moving on from that, the NBA started a separate entity in China, called NBA China. That company is worth about $5 billion today, according to various reports. In addition to that, NBA stars like LeBron James and Stephen Curry now go to the country to market their products with certain brands. It would be safe to say that Joe Tsai played a pivotal role in how the relationship between the NBA and China developed in recent years.