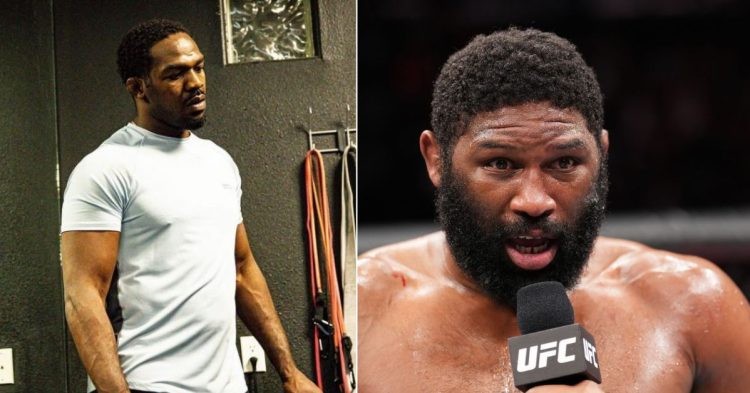 Curtis Blaydes is set to take on Tom Aspinall at UFC London. It’s safe to say, should he win this weekend, he will once again find himself in the title picture. Blaydes was present during the media scrum, and while he had a lot to say about the London crowd and fighting Tom Aspinall, Blaydes also invited the wrath of Jon Jones with his comments on the light-heavyweight champion.

Blaydes has always been quite vocal about Jones’ move to the heavyweight division, and as was the case this time around as well. Talking about Jones’ chances of winning against Stipe Miocic, Blaydes did not sound too confident about Jones.

Earlier, Blaydes had remarked Jon Jones doesn’t have knockout power and how the lack of experience in five-round fights could prove to be the decisive factor in his fight against Stipe Miocic.

While it’s one thing to say Stipe Miocic is a tough fight for any fighter, it’s another to completely disregard the skillset and experience of someone like Jon Jones who has time and again proved his mettle inside the Octagon.

Jones wasn’t too pleased with Blaydes’ comments either as he took to social media to slam the heavyweight contender.

Focus on your fight this weekend Tiny, you’ve been rooting against me for years now. I see you. Hating on me won’t propel you into being a champion. Less hate, more work

Jon doesn’t have one punch knockout power or five round championship experience, that’s why he’ll lose to Stipe. Bro you literally sound ridiculous

Jones even called Blaydes’ comments ridiculous and rightfully so. Razor’s comments on why Jones will lose to Stipe Miocic make little sense if we look at the five-round experience and striking skill-set that Jones possesses.