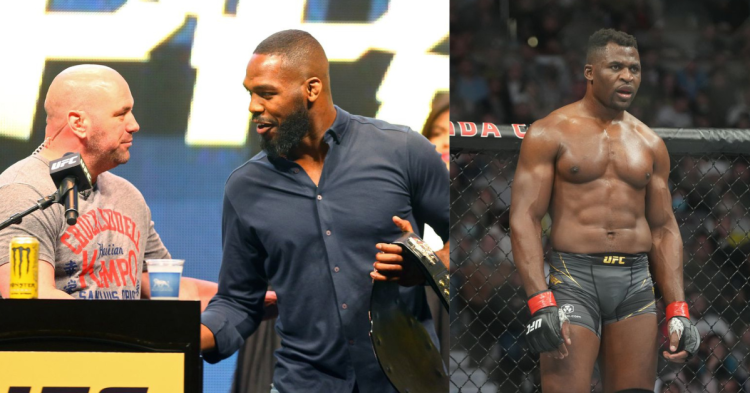 Jon Jones has been talking about his move up to the UFC’s heavyweight division for over a decade. Fans were losing faith in “Bones” with each passing day. However, a blunder by the T-Mobile Arena staff ended fans’ wait for Jones’ comeback.

And in the aftermath, UFC Vegas 67 saw some of the biggest announcements ever made at a post-fight presser. Dana White took the stage and addressed journalists’ questions for 20 minutes, announcing several marquee matches for the future.

The one that delighted fans the most was the announcement of Jon Jones’ comeback fight at heavyweight. White announced that Jones would be taking on Cirryl Gane at the UFC 285 PPV in March for the now-vacant heavyweight title. Jon Jones will be debuting at heavyweight in a title fight, something very few fighters in the UFC have done. The UFC President also revealed that Jones had signed a new contract with the company.

Answering a journalist’s question about the same at the UFC Vegas 67 post-fight presser, Dana White spilled the details regarding Jones’ new contract. “Jones signed a 8-fight deal,” revealed Dana White. In the UFC, an 8 fight deal can amount to a long time. Even the most active competitors usually fight only 3 or 4 times a year. This new contract could be the last deal Jon ever signs with the UFC before hanging up his boots.

Fans were worried that Jon Jones may have lost a step after nearly 3 years out of the octagon. He last beat Dominick Reyes at UFC 247 in a very close decision victory, with many believing the challenger to have won the fight. And now, his 8-fight contract has once again made fans anxious about the 26-1 fighter’s future.

Many think this 8-fight deal is much too long. Especially at Jon’s age of 35 and the long time he has been at the top of the UFC in vicious fights. As this news broke, many fans took to Twitter to voice their concerns.

zero shot he participates in half of those.

However, those doubting Jones may indeed be forgetting his pedigree. Jon Jones has the most title fight wins in light heavyweight history. And the only fight he has ever officially “lost” was when he was disqualified against Matt Hamill for throwing illegal 12-6 elbows. This is why many fans were also hyped for Jones’ comeback at heavyweight.

About to own the HW division for the next 5-years

Only time will tell whether Jon Jones moving up to heavyweight was a good decision. However, the former light heavyweight champion, who is arguably the greatest of all time, has hardly given fans a reason to doubt his skills within the octagon. And this holds true regardless of the issues in his personal life and his contract situation with the UFC.