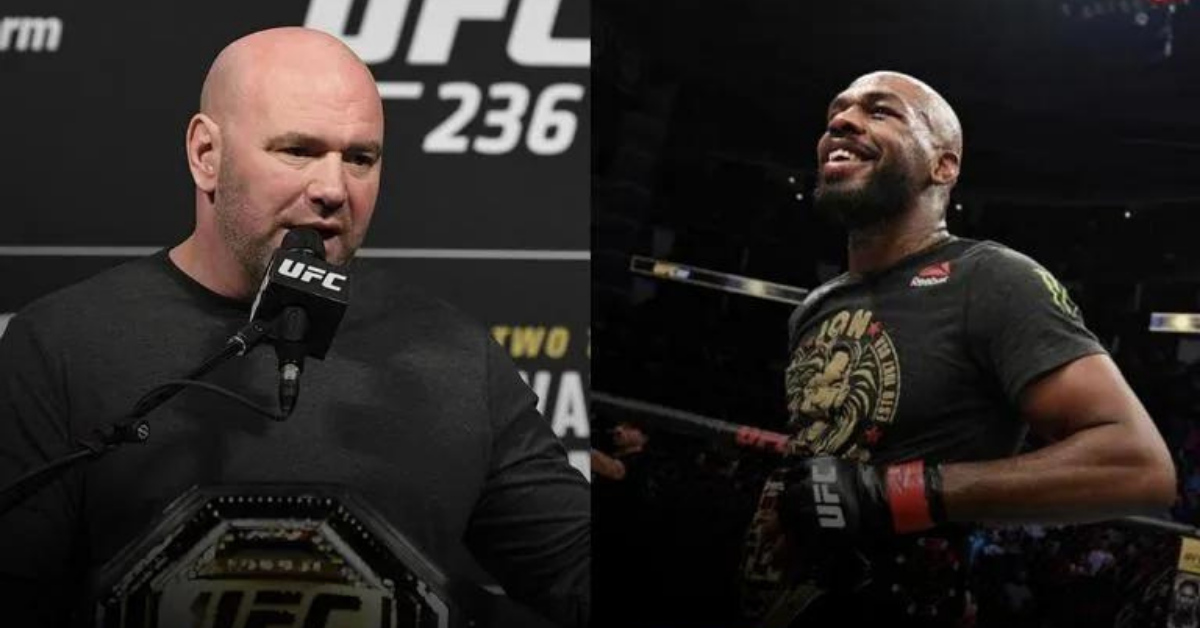 Jon Jones vacating the light heavyweight title may have put the repeated back and forth with Dana White on a halt, however, it showed how underpaid these fighters feel while walking inside that octagon. This is not the first time that a fighter has complained for being underpaid, the allegations were rife when UFC cut large portion of fighter’s pay after their bouts were cancelled due to the coronavirus pandemic. Meanwhile, Bellator put up a great narrative by giving out full pay to their fighters despite the cancellation. Regardless of all this, UFC continues to thrive and every amateur fighter dreams of walking inside the UFC octagon. The biggest and the most successful MMA organization in the world largely has nothing to lose. This was evident from Dana White’s comment on Jon Jones, when he said “he couldn’t care less” about the whole situation between him and Jon Jones.

Dana White as the President of UFC could have used his words wisely while dealing with a dispute against one of the greatest mixed martial artist of all time, and the champion of UFC’s light heavyweight division. Nevertheless, let’s trace back this war of words between Jon Jones and Dana White.

Currently in negotiation with @UFC as we speak

However, as it turned out, reports confirmed that Jon Jones had failed to strike a negotiation with UFC, and that the organization was not ready to pay the price. Soon after, Jon Jones took to Twitter, and put out these two following tweets.

Before even discussing numbers, the UFC was unwilling to pay more for the Francis super fight / for me to move to heavyweight. Said I could possibly earn more in pay-per-view buys.

This tweet marked was apparently the first statement from Jon Jones after the negotiations for a super fight against Francis Ngannou fell apart. In reply to a fan asking him if money was more important than legacy, Jones was quick to respond by saying that he could retire today, and feels that he has done his job by entertaining the fans around the world for over a decade for this company. Jones mentioned how even before discussing the number, UFC was unwilling to raise his purse for his jump to heavyweight.

It’s been fun you guys, maybe I’ll see you all in a year or two.

Jones followed it up with this tweet, evidently hinting a hiatus from the sport. He mentioned that he will be back when UFC learns how to do business. Soon after, he retracted his statement and admitted that he should have carefully chose his words, and that he believes they know how to business.

Maybe when they’re ready to do better business I’ll come back, until then health fitness and family.

I should’ve worded that differently, I actually think these guys do great business. Right now things just aren’t where I want them to be.

While the entire MMA world was talking about Jones’ decision to go on a long hiatus, Jones put out another tweet. Here, he mentioned how he may have reacted in the heat of the moment. This was similar to how Jones had said how UFC should learn how to do great business, which he retracted later by stating that things aren’t where he wants them to be. Jones took to twitter, and called off on the idea of moving up the heavyweight division. He called out Jan Blachowicz, admitting he is lot less emotional right now.

I’ve had some time to think about it and Im a lot less emotional. Just sad that the ufc doesn’t see my value against the scariest HW in the world. Jan I guess you’re next in line #badbusiness #shocked

Dana White: “Jon Jones is asking for an absurd amount of money”

However, it is to be noted that during this time of reacting in the heat of the moment, or the emotional ride of feeling that he is not being paid well, it did not get as ugly as it did after Dana White addressed the issue. White’s answer to what he feels about Jon Jones moving up the heavyweight division started what would eventually end with Jon Jones deciding to drop the UFC light heavyweight title.

It’s interesting to just sit here and watch your boss lie to the camera like this. We never discussed any increase in pay. Immediately the conversation was that I already made enough. I never made a number offer. https://t.co/YYx4FMHeIs

It was after this reply from Dana White that Jon Jones went on a twitter rant, repeatedly claiming that money was never discussed. It was in line with what Jon Jones had said in an earlier tweet, that before discussing number, UFC was unwilling to pay him more for the heavyweight jump. White also mentioned how it doesn’t make sense for him to jump to heavyweight when the rematch with Dominick Reyes made more sense.

I’m not going to give up hope the way I’m taking this whole thing is @Ufc don’t want to budget the Jon Jones heavyweight move up right now. They should’ve just said that, lying on me and saying I asked for too much it’s just unfair. That was unnecessary.

You already let me down a bit by shutting down this Francis Mega fight, don’t add salt to the wound by telling the fans something that’s not the truth.

if you’re wondering I’m not fighting with Ufc. I’m not mad at Dana or beefing. Just surprised he went that route. I said my piece, I’m over it

There were no heated arguments up until this point. Dana mentioned how Jones was asking for an absurd amount, and Jon Jones replied by stating that Dana is lying. However, in the lead up to Fight Night: Woodley vs Burns that took place last weekend, Dana White’s statements changed the entire narrative. While Jones remained adamant that he never mentioned an amount, White publicly stated a close approximation of what Jones was asking for the super-fight against Francis Ngannou.

Dana White addressed the media before Fight Night: Woodley vs Burns, and when he was asked about how much Jon Jones was asking for, here’s what White had to say.

“I will quote him. And what he had said to my lawyer. He told my lawyer he wants what Deontay Wilder was paid.”

Deontay Wilder, former WBC heavyweight champion of the world, pocketed $30 million from his rematch against Tyson Fury. Jon Jones was quick to respond to Dana White’s “Deontay Wilder” remark, and lashed out at UFC president.

Do I make 5+ per fight yes. Should I stick to that number for my super fights? No. If you don’t agree with me you just don’t know business. I certainly didn’t ask for 30, never even threw out a number.

Jon Jones called Dana White for apparent lying, and insisted that he never mentioned an amount. Adding on to White’s statement that he is the MMA GOAT, Jones threw the idea of how he deserves at least half of what Deontay Wilder makes.

Don’t be a fucking liar, my reputation has already taking enough hits. I don’t need this bullshit Dana. I never asked for Diante Wilder‘s numbers. And how about since Diante is making 30 million, we settle for half of that. Since you said I’m the goat and everything.

It became evident at this point that the entire situation had gone out of control, and Dana White’s remarks in the post-match conference after Fight Night: Woodley vs Burns did not help much. White targeted Jones personally, claiming how he has already tarnished himself, in repsonse to Jones’ tweet that his reputation is taking a hit because of White’s apparent lying. During this whole time, White claimed that he was ready for a lie detector test, while Jones targeted White for framing him as someone who was demanding money from him. The use of the word “demanding” was used by Dana White during the first interview with Brett Okamoto.

Dana White feels he couldn’t care less about Jon Jones, which is completely arrogant of a promoter to say about his fighter. White could have approached this situation with some more maturity. Jones’ mentioned that UFC could have just said they cannot budget his move to heavyweight division right now – would have been the right way to go. However, White decided to publicly slam Jones for allegedly demanding the sum of amount that he did, and also mentioned how he cannot come at him after going through what he went through, and ask for that absurd amount. White was supposedly mentioning Jones’ recent DUI arrest, and pointed at how he shouldn’t be asking this much money after doing what he did.

It’s hard to say if White is lying about the whole “Deontay Wilder” remark, however, there were better ways how he could have dealt with the situation. There is no way to know if Jones was lying, however, on a business standpoint, he has further ruined his own chances at getting more money with some other organization. Looking at how profitable and huge UFC is, and looking at the current limited earning due to the pandemic, UFC was his best bet at receiving the paycheck he thinks he deserves. Needless to say, Jon Jones will certainly earn more in a boxing ring, if paired with one of the best in the boxing business. Jones has nothing left to prove in the MMA world. Nonetheless, he is looking forward to his fight against Israel Adesanya in early 2021. And he has a reason.

Zion Williamson or Ja Morant for Rookie of the Year?