Jorge Masvidal is known for many things, keeping his thoughts to himself is not one of them. In his latest interview on Ariel Helwani’s MMA Show, the BMF champion previewed his upcoming title bout and shared his feelings towards the rest of the welterweight division. In particular, Masvidal had an unusual jab pointed towards his former opponent and Stockton’s own Nate Diaz.

In his latest interview with Ariel Helwani, Jorge Masvidal had some not-so-kind words for his rival Nate Diaz while implicating Diaz was afraid of the physical consequences of a rematch with Masvidal.

Back in November of 2019, the two men closed off a massive year for the UFC with their sold-out gate at the Madison Square Garden. The event hosted who’s who of celebrities along with then President of the United States, Donald Trump. Though the first minute of the bout seemed competitive, it was soon clear that Masvidal was the better and more powerful striker of the two. It is never easy to put out Nate Diaz, but Jorge came as close as any man could get. The bout was unceremoniously waived off after the third when Nate suffered a cut that the NYSAC doctor considered too dangerous to continue with.

An evolving rivalry between Jorge Masvidal and Nate Diaz

Ever since both men have been quite respectful of each other, not counting the few illegible disses by Nate once a while on Twitter. It would seem that it was one of these tweets that rubbed Jorge the wrong way. When asked why the Diaz rematch fell through, Jorge initially said there were contract disputes but then bluntly declared Diaz was worried about the “violence” Masvidal brings. 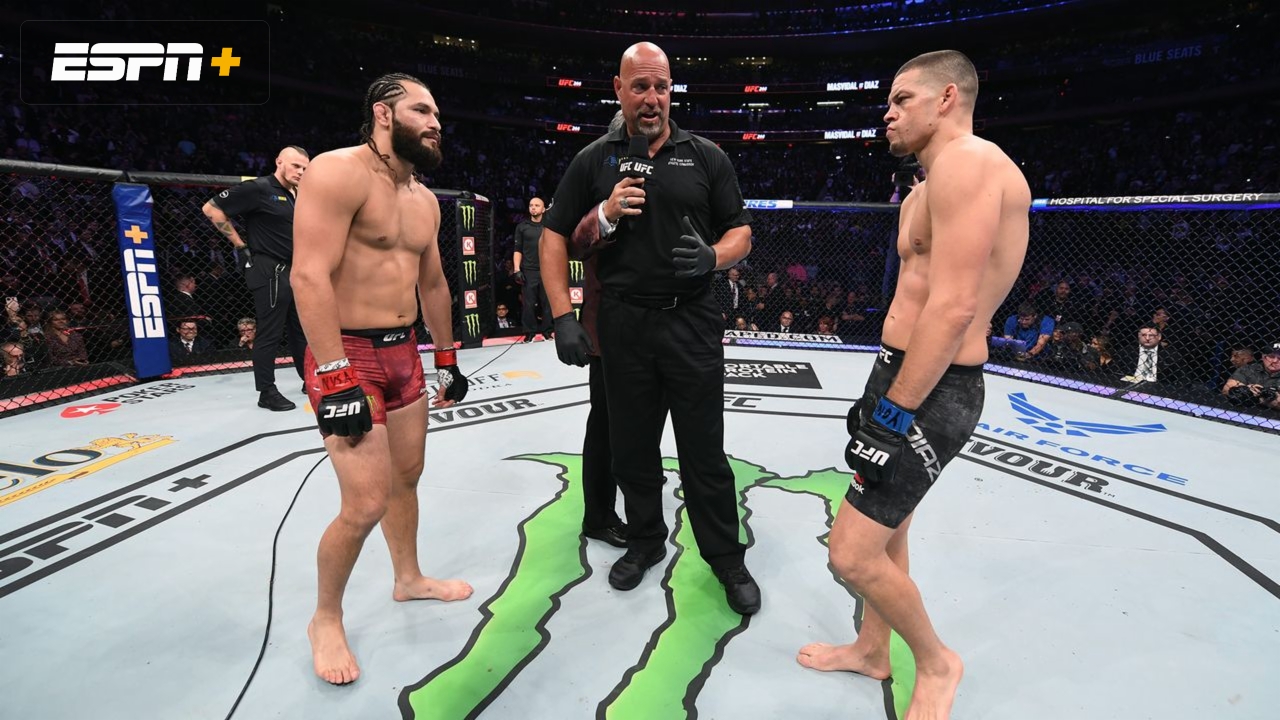 “Maybe he thought about it, even more, this guy is going to destroy my face, again!” said the BMF, ending jokingly by suggesting, “Maybe he wants to have a modeling career”. Masvidal did give Nate credit where it’s due, calling him a bigger draw than Champion Kamaru Usman or perennial contender Leon Edwards.

The Miami native also laid out his ambitions for when he wins the title and ultimately talks of hanging up the gloves. He promised that the bout with Nate will be run back some time or the other.

With Jorge Masvidal facing Kamaru Usman in the first PPV in a year to be held at full capacity, UFC 261, and Nate facing Leon Edwards at 262 in the first-ever 5-round non-title co-main event, there is a very slim chance that the BMF rematch could also be a bout for the Welterweight title. Alas the MMA Gods are never so kind.