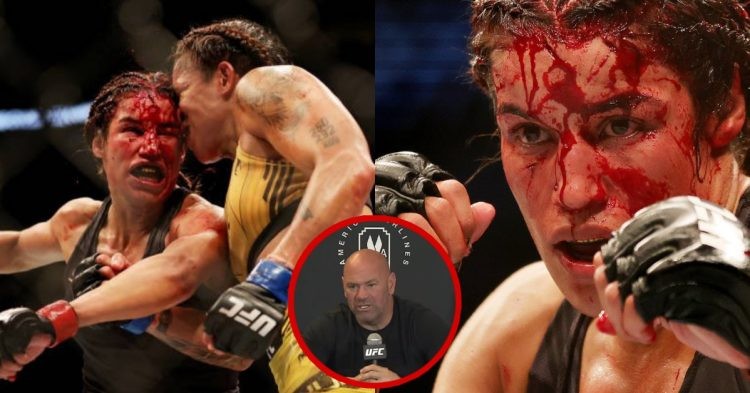 UFC President Dana White gives an update on Julianna Pena following her title defence at UFC 277. White revealed that Julianna Pena will have to go under the knife after her brutal fight against Amanda Nunes in the recently concluded Pay Per View (PPV).

Julianna lost her title to Amanda Nunes in the main event of UFC 277. Pena put up a valiant effort to retain the title, but Amanda turned out to be too good for her on the night. Not only did The Lioness register a record amount of knockdowns in women’s UFC fights, but she also landed some vicious elbows on the ground.

Although the first takedown did not take place until the third round of the fight, grappling played a big role in the latter part of the contest. Julianna Pena tried her best to secure submissions on the ground. But it left her open to get getting hit and Nunes took full advantage of that.

The repeated elbows on the ground made a big dent in Pena’s forehead. In the post-fight press conference, Dana provided a big update on her situation. He also wants to see Pena taking a lengthy break from the sport.

“Yeah, Julianna has got a big chunk missing from her forehead. She’s going to see a plastic surgeon right now. Take some time to heal and then, I don’t know. She got pretty banged up. I mean she got, there was like 5 or 6 knock downs under first two rounds. She was hurt. She needs to take some time off and relax. Spend some time with her daughter and we’ll go from there.”

As mentioned before, Amanda Nunes secured 3 knockdowns in the second round against Julianna Pena at UFC 277. It is a record for female fights in the UFC. But that is not the only record that she created.

Although Nunes could not get Pena out of the Octagon despite dominating for 25 minutes, she perhaps got the next best thing. Her performance over Pena was so overwhelming that the judges scored the bout 50-45, 50-44 and 50-43 in favour of the newly crowned champ

Before this fight, only two UFC fights warranted a 50-43 scorecard. The very first time it happened was in 2008 at UFC 87. Georges St-Pierre‘s win over Jon Fitch had a scorecard of 50-43. The second one took place at UFC 223 when Khabib Nurmagomedov‘s dominant win over Al Iaquinta consisted of a 50-43 score as well.

It just goes to show how rare the score really is. Hence, there is no question that this performance from Amanda Nunes will go down in history as one of the most dominant ones in the UFC title fights. Julianna Pena certainly gave it her all. But Amanda Nunes is regarded as the GOAT for a very good reason.