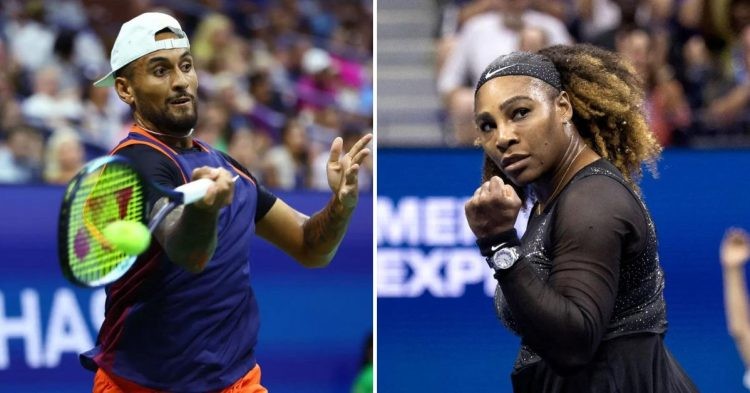 Ahead of his first-round match against fellow Australian and friend Thanasi Kokkinakis, Nick Kyrgios was watching Serena Williams‘ first match at the US Open. Both Serena and Kyrgios won the match comfortably but Serena’s match was way more special.

Since the tournament is Serena’s last one before retirement, people came in large numbers to support the American legend. It set a record for the US Open as 29,402 fans filled the stadium to cheer for the junior Williams.

When Nick Kyrgios was asked about Serena’s match, he revealed how he was also watching it with his girlfriend. As per Readygista, Kyrgios said, “Oh yeah [I was watching Serena Williams’ match]. Well, you know, I can’t imagine how she’s feeling and I was actually watching the match with my girlfriend in the lounge.”

During her long and illustrious career, Serena has managed to promote tennis wide and far across the globe. She has been the face of women’s tennis for more than two decades. Her 27-year-long career as a professional tennis player will sadly come to an end at the US Open but her contribution to tennis is immeasurable and intangible.

Kyrgios acknowledged the same and expressed how he also wants to grow the sport as much as Serena has in her career. While it will be a humungous task to match the level of Serena, Kyrgios surely has the potential to make a name for himself by winning more grand slams.

Moreover, he said, “She was really excited. Just the buzz that she brought, broken history with the amount of people buying tickets and viewing which is incredible. That’s my goal, to grow the sport as much as I can. So hopefully Serena can keep going and I can go on as well.”

Both Serena and Kyrgios still have a long way to go at the US Open. From the looks of it, Serena seems to be back in form and can compete neck-to-neck with the biggest names in women’s tennis right now.