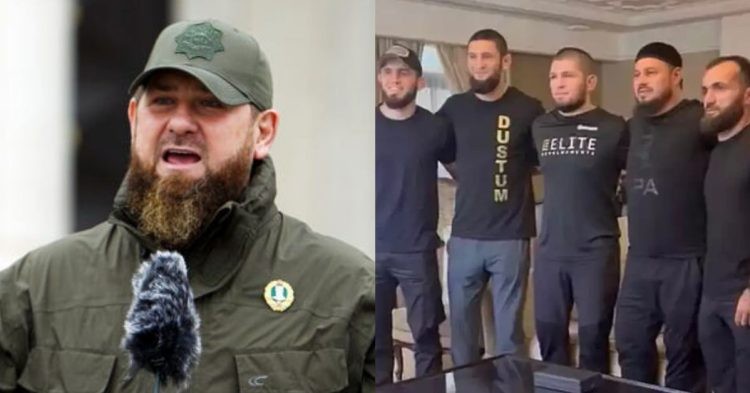 Khamzat Chimaev came into the spotlight for the wrong reasons yesterday as he was involved in a physical altercation with Islam Makhachev’s teammate Abubakar Nurmagomedov after the conclusion of the UFC 280 PPV.

As per reports, The Borz punched Abubakar in the face after the main event fight near the cageside. Before their altercation would escalate, UFC security intervened and separated Chimaev and Islam’s teammates.

This was not the first time Khamzat has been a part of a physical altercation at an event as he previously engaged in a brawl with Nate Diaz and Kevin Holland at UFC 279. There has been bad blood between Khabib and Chimaev for a long time now and Borz’s actions would have likely intensified their rivalry.

However, that doesn’t seem to be the case as a few hours ago Khamzat Chimaev was spotted having dinner with Khabib Nurmagomedov and his teammates. Russian politician Ramzan Kadyrov has sorted out the beef between Chimaev and Abubakar.

The influential political figure is friends with both Khabib and Khamzat and apparently, he spoke to Borz and asked him to squash the beef with Abubakar. Ramzan Kadyrov explained the whole situation on Instagram and confirmed that there was a misunderstanding between Chimaev and Nurmagomedov.

Meanwhile, Orlando Magic player said “Kadyrov ain’t going for that. Give each other a hug 3…2…1. All jokes aside it’s good to see they squashed it.”

POV: you got beaten up by Khamzat Chimaev and then Ramzan Kadyrov made you apologize to him and now you have to pretend that you like him or you’re dead. pic.twitter.com/K9locK8sTQ

“When the boss calls, they all stand tall and quiet.”

It is good to see Khamzat Chimaev and Khabib Nurmagomedov put their rivalry to an end after sharing a bad relationship for a long time. With them squashing their beef, we might not see a matchup between Islam Makhachev and Khamzat Chimaev next.

However, one cannot completely rule out this matchup as Islam has expressed his desire to move up to welterweight in the future.