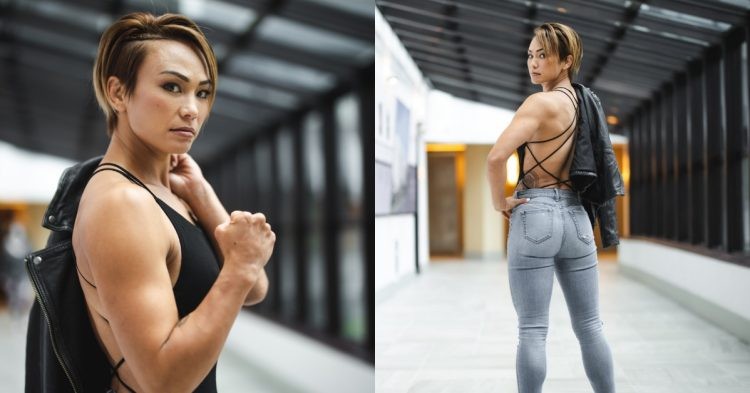 Michelle Waterson will fight Amanda Lemos this weekend at UFC Fight Night: Brian Ortega vs Yair Rodriguez. She lost to Marina Rodriguez in her last outing via unanimous decision in May of 2021. Her bout against Lemos will take place after more than a year and it seems like Waterson has made some changes to her look ahead of her return.

The UFC recently put out a post where Waterson could be seen posing in her new look. She previously had long, dark hair and it was her trademark look. On top of her stunning good looks, Waterson has a fighting style that primarily relies on her Karate stance. It earned her the nickname of ‘Karate Hottie.’ But she has made a big change to her hairstyle.

The Karate Hottie is 𝘽𝘼𝘾𝙆 🔥

Michelle now has short blonde hair and the fierce look on her face certainly adds a lot to her personality. Before chopping off her hair, she dyed her hair blonde and got dreadlocks. But she now has gotten rid of the locks and has opted for a much shorter hairstyle.

What does the future hold for Michelle Waterson in the UFC?

Michelle Waterson is a veteran of the sport. She made her debut in 2007 against Andrea Miller at Ring of Fire 28. After a dodgy start, Michelle turned her career around with 10 wins in 11 fights. Before joining the UFC, she had a record of 12-4 which included a victory against Jessica Penne for the Invicta Atomweight Championship.

Her main roster run in the UFC began with 2 back to back losses to Rose Namajunas and Tecia Torres. But Waterson did not give up and made a strong comeback with 3 successive wins over Cortney Casey, Felice Herrig and Karolina Kowalkiewicz. It put her in a good position to aim for the strawweight belt.

However, she was dominated by former champ Joanna Jedrzejczyk in a 5 round main event fight in October of 2019. Since then, she has not been very active and has a record of 1-2. In order to rejuvenate her career, Michelle even moved up to flyweight, but even then she had no luck.

But she will move down to strawweight once again for her latest bout against Amanda Lemos. Waterson is currently ranked at no. 10 in the division. Hence, a way to the top seems like a long shot at this time. In order to have any chance to make another run for the title, she needs to beat Lemos this Saturday. Michelle is 36 years old. So the window to rediscover her form will be very short.

What do you think is next for Michelle Waterson? Do you think she is still an elite fighter in the UFC? Let us know your thoughts in the comments down below.