“Kareem Has Also Criticized LeBron” – Shaquille O’Neal Sheds Details About His Sour Relationship With Kareem Abdul-Jabbar and Wilt Chamberlain, Backs LeBron James for His Recent Comments on the NBA Legend 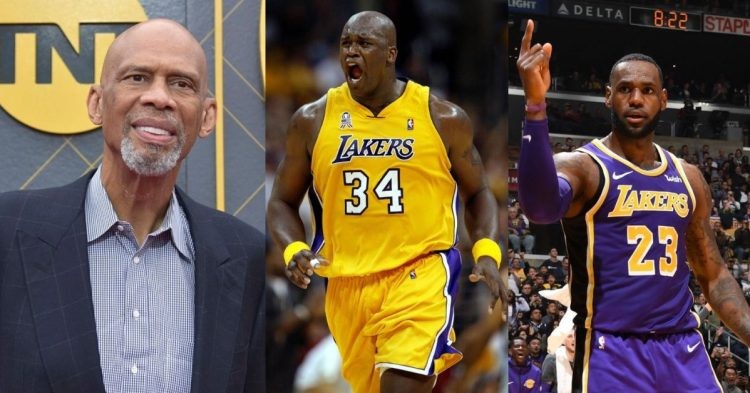 LeBron James is one of the greatest athletes of all time. Not only in basketball, but his impact in all sports categories also can never be understated. Since joining the NBA as a superstar in 2003, he has made a remarkable evolution as one of the GOATs with 4 NBA championships to his name. Not only that, but he also sits second on the all-time points scored leaderboard.

As we all know, former LA Lakers star and NBA legend Kareem Abdul-Jabbar is currently in first. In 1,560 games played, Kareem has scored 38,387 points during his NBA career. As for LeBron, he has made 37,062 points in 1,366 games. LeBron is only 1,325 points away. He would only have to average about 16/17 points per game to break Kareem’s record.

“No thoughts. And no relationship”

LeBron on chasing Kareem’s scoring record and if they have a relationship pic.twitter.com/yls2c1DJgF

The tension has been building up towards the day that King James finally does it. Many were intrigued to know what the relationship between Abdul-Jabbar and James was. It seems like there were “no feelings and no relationship”, which was when LeBron got brutally honest. Many found James’ comments to be disrespectful towards an NBA legend, as he did not say anything positive about Kareem.

However, another former NBA legend has come out in support of King James. It is none other than the great Shaquille O’Neal, who had his say on the issue. On the latest episode of The Big Podcast With Shaq, he defended LeBron.

Shaq said, “It wasn’t disrespectful, I played for the Lakers eight years…How many times did Kareem call me? How many times have you criticized me? Kareem has also criticized LeBron a long time ago. By the way, me and Kareem, we met three, four years ago, we’re good now. Yeah, we did a commercial together.”

The American businessman claims that the lack of relationship between James and Kareem isn’t a big deal. Moreover, he mentions that he didn’t have one with the legend back in the day too. As he said, not being recognized and getting that call from all-time greats will be a motivating factor for you to be more successful. It seems like that was the case in Shaq’s career.

LeBron James’ lack of relationship with Kareem will be a motivating factor, according to Shaq

“And it’s fine, I understand. Kareem has been very very hard on LeBron, and us players when we get to a certain status, and guys that were before us, we would like to get the call first. From a guy that’s right there, I’m in the same world, I’m not as high as you on that floor but I’m in the same building.”

As he mentioned not getting the call from Kareem, he spoke about having a good relationship with late NBA icon Bill Russell. O’Neal also revealed that he didn’t have any feelings toward Wilt Chamberlain too. Shaq concluded that LeBron is not in the wrong as he is only speaking the truth. Moreover, he feels like he would have done the same thing if he was in his shoes as well.

O’Neal added, “I don’t think he [LeBron James] is being disrespectful, I think he’s being truthful. I would have been the same da*n way. I always say, if I were to pass up Wilt Chamberlain, I would have arrogantly told the world, ‘I’m the most dominant guy in the world’.”

In the all-time scoring charts, Shaq is in 8th place with 28,596 points. On the other hand, Wilt is in 7th place after having made 28,596 points. As O’Neal had mentioned many times before, he was not that far off from catching up to Wilt. He declares his support for LeBron James by saying that he would have said the same thing in his own words if he was catching up to Wilt back in the day.

How to Watch Deontay Wilder vs Robert Helenius in USA and UK – Start Time, Tickets, PPV Price, Fight Purse, and How to Stream Live