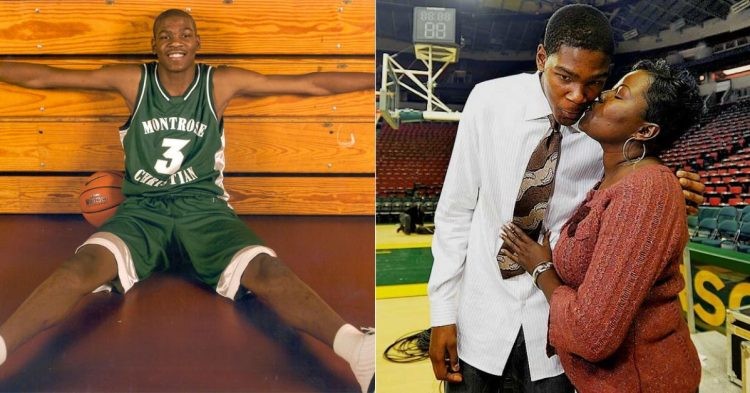 Kevin Durant is a superstar in the NBA and is currently with the Brooklyn Nets. He can be considered a veteran in the league and has been there for almost 15 years now. Additionally, he has won 2 NBA titles and Finals MVPs throughout his career. This was with Steph Curry and the Golden State Warriors between 2017 and 2019.

An NBA player is not born with otherwordly skills and physical ability. However, it is true that genetics and environment play a huge role in the development of a young child\ athlete. One could want to look back at Durant’s childhood in order to understand how far he has come and what he has been through in his whole life.

KD was born to Wanda Durant and Wayne Pratt on September 29th, 1988. Unfortunately, his father decided to abandon his family and divorce Wanda. This caused a lot of tension and turmoil in KD’s life from a very young age. That also led to the family deciding to stay with Kevin’s grandmother.

Several years later KD’s father came back into his life. However, Durant was already 13 and showed promise and talent in the sport. One could say that his father played little to no role in his development as a young child all the way to becoming a teenager.

Wanda Durant is another entirely different story. When her son Kevin joined the league and went on to win the 2014 NBA MVP award, he took the opportunity to explain what she has done for him and how much it has changed him into the man he is today.

” Me, my mom, my brother, we moved so many different places growing up and it felt like a box. Felt like there was no getting out… I’ve been through the toughest times with my family but I’m still standing… My mom, I think she just wanted to get me and my brother out of the house for a couple of hours, but when I walked into the gym I fell in love with the game.”

Kevin Durant went on to individually thank all the people in his life who made a difference. He saved his mother for last, “ And last my mom, I don’t think you know what you did. You had my brother when you were 18 years old. Three years later I came out. The odds were stacked against us. Single parent with two boys by the time you were 21 years old, everybody told us we weren’t supposed to be here. We moved from apartment to apartment by ourselves.”

It is troubling to simply imagine what KD went through in his early years. Thanks to his perseverance, his family will never go through something like that again.