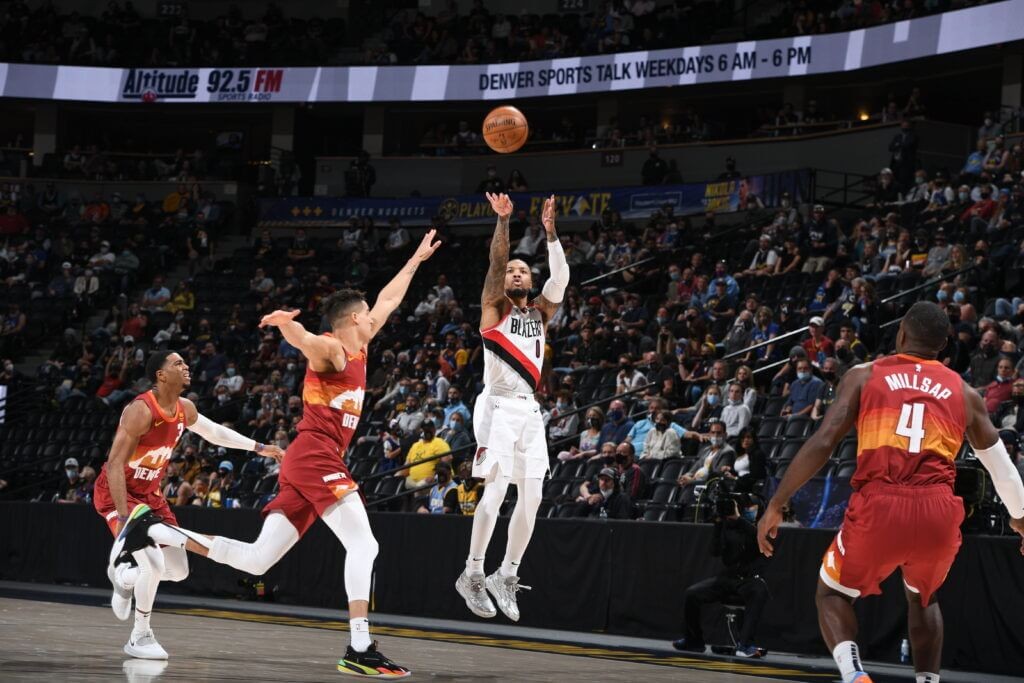 We experienced arguably one of the greatest Playoffs game tonight between Denver Nuggets and Portland Trail Blazers. And the credit for this goes to Damian Lillard for torching the Nuggets and carrying Blazers on his back for 52 minutes. He broke the record for most 3-pointers in a single playoff game previously held by Klay Thompson of the Golden State Warriors. Kevin Durant, Stephen Curry, and other NBA players were in awe watching Dame fire 3-pt shots effortlessly.

History: Portland’s Damian Lillard has set the NBA postseason record for 3-pointers made in a game at 12 (and counting). 🔥

However, the night didn’t go in favour of the Portland Trail Blazers as they lost to Denver Nuggets in double overtime. Damian Lillard shot the clutch 3s both in regulation and in OT1 to keep the hope alive. Every player on Blazers’ roster not named Damian Lillard had an off night shooting 1-9 in second overtime. He had 55 points, 6 rebounds, 3 blocks and 10 assists with only 1 turnover. His team on the other hand shot miserably throughout the game.

To add to the wounds, Blazers lost the game because of a careless mistake made by CJ McCollum towards the end of the game. with 10 seconds left on the clock, CJ stepped out of bounds with the ball in his hand and Blazers lost the final possession down 3. This most likely cost them Game 5 but they look to bounce back at home in Game 6.

Even though the night ended on a disappointing note for Damian Lillard he can go home to incredible praise from his colleagues. Some NBA greats took to Twitter to marvel at this historic performance on display. Kevin Durant shot out 3 tweets after closing out the series in Brooklyn tonight against Boston Celtics. He was clearly in awe watching Dame perform the way he did and called it a spiritual experience.

I had like 4 tweets I wanted to write to describe this MASTERPIECE by Damian Lamonte Ollie Lillard Sr, but I am seriously at a loss for words…

In addition, the greatest 3-point shooter in NBA history, Stephen Curry himself, took to Twitter after watching Dame jack back to back clutch 3s late in the game. His Warriors teammate Draymond Green went as far as to say that the Blazers star could beat the Nuggets single-handedly.

.@Dame_Lillard that’s all I have to says

DeMar DeRozan, Magic Johnson, Ja Morant and Josh Hart among others congratulated Dame for the record-breaking night albeit in a loss. Lillard was so efficient tonight that Nuggets’ Austin Rivers had to join his hands and ‘Thank God” mid-game when Damian Lillard finally missed a shot.

Austin Rivers after this Dame miss. 💀💀

NFL quarterback Patrick Mahomes tuned into the Blazers vs Nuggets game as well and gave Dame a shoutout for the crazy night he had. NBA certainly regrets televising LA Lakers getting blown out by Phoenix Suns over the double OT between Blazers and Nuggets.