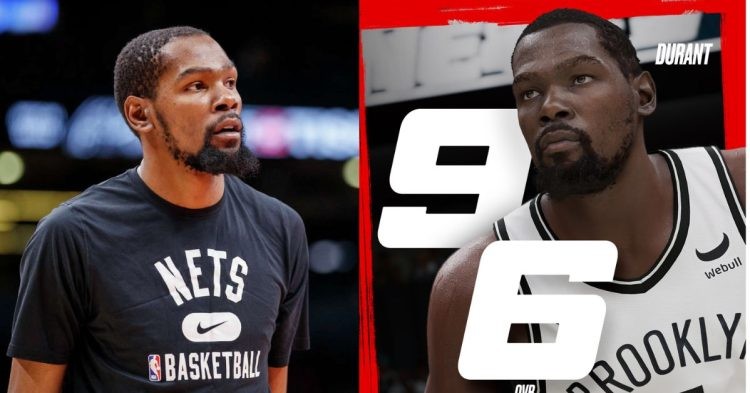 Now that NBA 2K23 is out, everyone has the option of accessing the game. That allows them to check out the ratings of NBA stars like Kevin Durant. He is one of the many players who was wondering how fair the NBA 2K creators have been with the ratings this time.

The Brooklyn Nets superstar has been given an OVR of 96 in NBA 2K23. This is one of the highest ratings and is second only to Giannis Antetokounmpo’s 97. Ronnie 2K is the digital marketing director for NBA 2K and had a sarcastic back and forth with Durant through Twitter. One must wonder about the context of this discussion and what each side had to say.

Everybody is entitled to an opinion and the 2x NBA Finals MVP just mentioned his. After all, this all began when Ronnie 2K instigated KD.

“ I am petitioning for us to remove MJ on the cover and replacing it with you the real 99.”

I am petitioning for us to remove MJ on the cover and replacing with you the real 99 https://t.co/hzXzHhU04X

This tweet was clearly dripping with Sarcasm. There is no way Ronnie 2K actually petitioned to replace MJ. Moreover, even if he did, it wouldn’t be with Kevin Durant after the drama he has put the world through this NBA offseason. There was no way Durant would leave this unresponded.

“Aye @Ronnie2K I’m gonna need an explanation on why I’m not a 99? This has become laughable.”

Thus, the interaction between them ended. We should wonder about a few things. Firstly, why would the NBA 2K digital marketing director choose to pick a beef with KD? Additionally, Ronnie did so on a public platform like Twitter, where he knew the public pressure would force Durant to respond.

Coming to Durant, Thankfully, he did not directly disrespect Michael Jordan as a result of snapping back at Ronnie 2K. He simply stated that he thought it was ridiculous that he isn’t already a 99 OVR. If Durant is a 99, we should wonder what he would rank Jayson Tatum and Giannis Antetokounmpo. After all, these are the two stars of the teams who eliminated him since his time with the Golden State Warriors.

In any case, we can conclude that Durant will not be a cover of NBA 2K anytime soon.