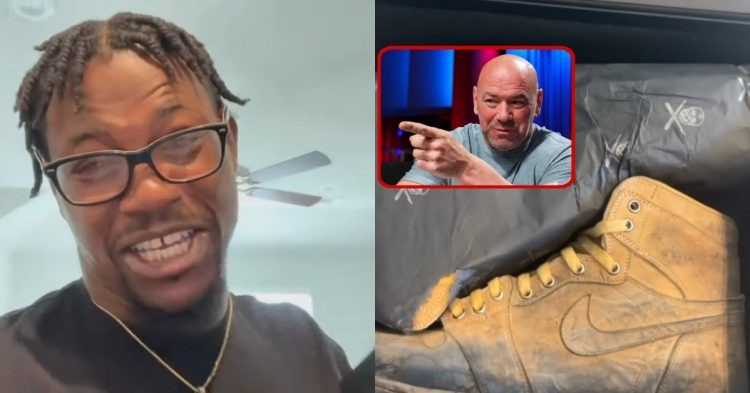 The bromance between Dana White and Kevin Holland continues as he gifts Holland a brand new pair of shoes. It appears to be a retirement gift from Dana to Kevin, who has recently hung up his gloves. After his one-sided loss against Khamzat Chimaev at UFC 279, Holland decided to walk away from the sport at a relatively young age.

His early retirement shocked a lot of fans, including UFC President Dana White. White, who is a big fan of the 29-year-old, has recently sent him a pair of Nike sneakers. Both Dana and Kevin are big shoe collectors. Previously, Dana spoke about how often he and Holland buy shoes for each other.

That trend just continued as the Trailblazer shared the footage of Dana’s gift on social media. Kevin was extremely excited about it and could hardly contain his excitement!

Although Kevin made a terrible first impression on Dana White, they have come a long way since then and have developed a great friendship. Dana absolutely loves Holland’s attitude of never saying no to a fight. Plus, Kevin has a style of fighting which is extremely fan friendly. So no wonder Dana has a soft spot in his heart for Kevin.

As mentioned previously, Dana White adores Kevin Holland. Hence, Holland’s retirement after UFC 279 broke Dana’s heart. In a recent press conference, he was asked about his thoughts on Kevin’s early retirement. Although the 52-year-old wants to give Kevin the freedom to do whatever his heart wanted, Dana was a bit disappointed for sure.

According to Dana, the big losses against dominant wrestlers have pushed him to make the decision. Kevin is a proud fighter, hence the way he lost to Khamzat Chimaev was definitely eye-opening for Holland. He may have realized that he is miles behind wrestlers like Khamzat, against whom, Kevin seemed defenceless.

However, he is still in the prime of his fighting career. So a return to the Octagon soon in the future can not be ruled out either. At the relatively young age of 29, there is still a lot of time for him to evolve his game and become a much more well-rounded fighter. Even, if he does not fight again, with a record of 23-8, Holland has had a great run!