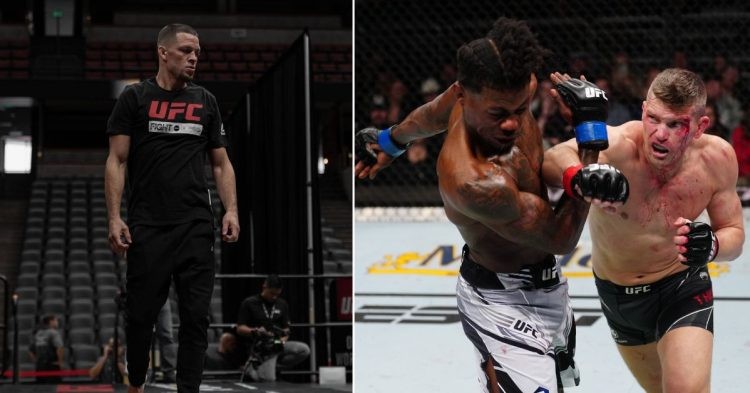 The UFC Orlando headliner between Stephen Thompson and Kevin Holland was just what you expected. Holland and Thompson delivered arguably one of the finest showcases of a striking battle seen inside the UFC cage. After everything was said and done, it was Thompson who emerged on top with a corner stoppage win over Holland after the end of Round 4 to jump back to the winning column.

The victory marked Thompson’s first win since December 2020. Wonderboy was on a two-fight losing skid prior to this fight. Meanwhile, Khamzat Chimaev entered the UFC cage in the back of a first-round submission loss against Khamzat Chimaev. The fight marked the second straight loss of Holland’s career.

Great night of fights . Wonderboy reminded everyone that he’s a beast on the feet !#UFCOrlando

And that’s why i wrestle

What an awesome fight. Wonderboy clinic of martial arts Holland clinic on toughness

The Orlando crowd was on its feet for the entire duration of the fight, as Thompson and Holland put on a potential “Fight of the Year” outing in the main event. After a competitive first round where Holland rocked Thompson, it was Wonderboy who took the charge in the second round, and what followed was a vintage striking battle with the former UFC Welterweight title challenger getting the better of Holland on most occasions.

UFC fans watching around the world were thrilled by Holland’s tenacity and Thompson’s masterclass. Despite possibly breaking his right hand in the closing moments of the third round, Holland showed the heart of a warrior as he stood toe-to-toe against one of the finest strikers in the division.

Tough as nails for sure, unfortunately wonderboy was the hammer

How did Kevin Holland eat this?! It was SO loud #UFCOrlando https://t.co/JwzumFMiy9

Trailblazer revealed during the post-fight Octagon interview, he hurt his hand during the first round. As for Thompson, the 39-year-old UFC veteran announced his return to the winning column, proving why he still deserves to be among the elites of his weight class.

Damn..he has a strong neck holding That head 🤕

Reactions poured in from all over, as fans hailed Holland’s toughness, even comparing him to the Stockton Slugger Nate Diaz. On some days you are the hammer, and on some, you are the nail. While Holland has dominated on most occasions with his striking, it was Wonderboy who was a touch above the Trailblazer at UFC Orlando.