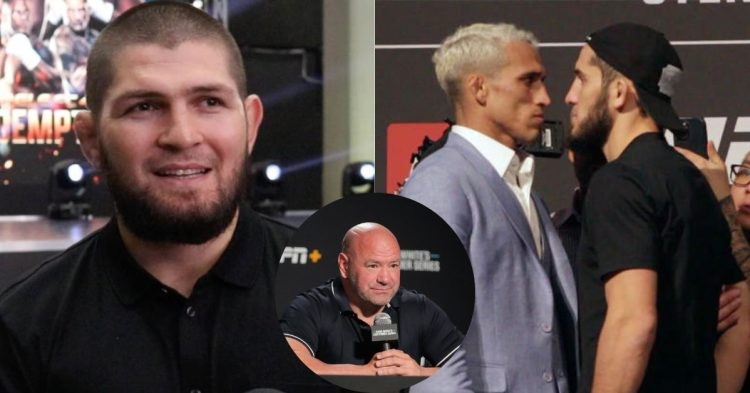 UFC 280: Charles Oliveira vs Islam Makhachev is all set to go down this weekend on October 22nd at the Etihad Arena in Saudi Arabia, UAE. This PPV features two title fights and the entire card is stacked with exciting matchups that will keep the viewers entertained throughout the evening.

As we edge closer to this PPV, UFC President Dana White sat down for an interview with BT Sport and discussed several topics about the fight card. While having a conversation, Dana was questioned by the interviewer about people setting a narrative that Islam received the title shot because of Khabib Nurmagomedov.

Dana White cleared the air and confirmed that Khabib had no involvement in making this fight and Makhachev deserved the title shot after Beneil Dariush’s injury.

“Islam belongs here. This is the right fight to make. I wanted to do Dariush versus Islam but Dariush broke his ankle. This is how this works out sometime. This does not have anything to do with Khabib. Khabib did not make this fight.”

It is true that Oliveira wanted to fight Khabib initially and was only ready to offer Islam a title shot if The Eagle came out of retirement. However, after Beneil Dariush’s injury, Do Bronx had no option but to accept the Islam fight as he had defeated the rest of the top five contenders.

UFC President Dana White heaped praise on former lightweight champion Charles Oliveira while discussing about the main event of UFC 280. Dana also added in the interview with BT Sport that Do Bronx’s eleven fight winning streak has gone under the radar and he is incredibly good for finishing ten out of his eleven opponents.

Until now the Brazilian lightweight’s performances and wins over top contenders has not received the recognition that it deserves from fight fans and rivals. However, a win over Islam Makhachev would help him make a big statement and solidify his place as one of the greatest lightweight fighters in the history of UFC.

It is needless to say that this matchup will be highly entertaining and there is a high possibility that the fight would not go to the distance. Do let us know in the comments section below who you think will win this lightweight title fight at UFC 280.