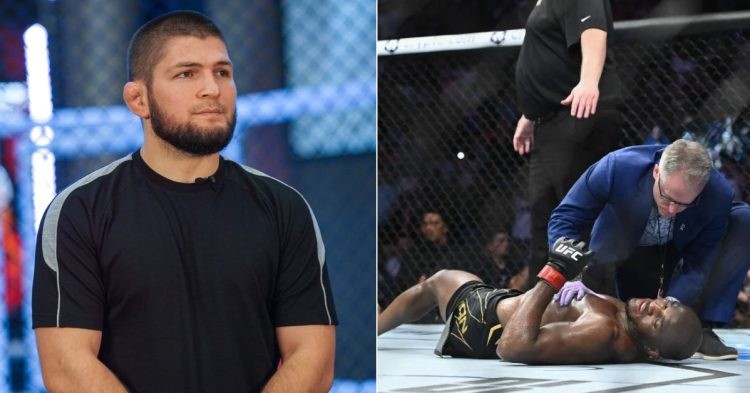 Leon Edwards did the unthinkable after he knocked Kamaru Usman out cold with a head kick to become the new undisputed welterweight champion of the world. The British fighter was trailing in the fight for the better part of the entire duration till the moment he connected that vicious head kick that took the light out of Kamaru Usman.

In the process, Leon Edwards became the first fighter to knockout Kamaru Usman and became the first British fighter to hold the UFC gold after Michael Bisping, who won the title back in 2016. Needless to say, it was a shocking turn of events for Usman, who was largely dominating the fight.

Kamaru Usman’s close friend Khabib Nurmagomedov gave his reaction to the unfortunate finish and shared how it was “tough to witness” what followed in the fight.

“Honestly, I was shocked and even a little bit upset you could say. Because with Kamaru, I have very good relation and of course, it was tough to witness the best fighter in the world as he is currently is, get sent with 50 seconds left until the end of the fight into a deep knock out.” Khabib Nurmagomedov said.

Nurmagomedov opined how even a small mistake can lead to your downfall in a sport like MMA and rightfully so. Just one minute remaining in the fight, even the commentators had stopped talking about Edwards’ chances of winning via stoppage. The British fighter is not particularly known for his knockout power or exciting finishes.

Khabib Nurmagomedov has always opined on how a fighter is never the same after a brutal knockout loss. He had the same opinion when asked about Kamaru Usman and believes it will be “interesting” to see if the Nigerian Nightmare can make a turnaround.

Be that as it may, he did add that he believes Usman can beat Edwards in the trilogy fight and is ready to watch that fight. UFC is already planning a trilogy fight between Edwards and Usman in Wembley, London.