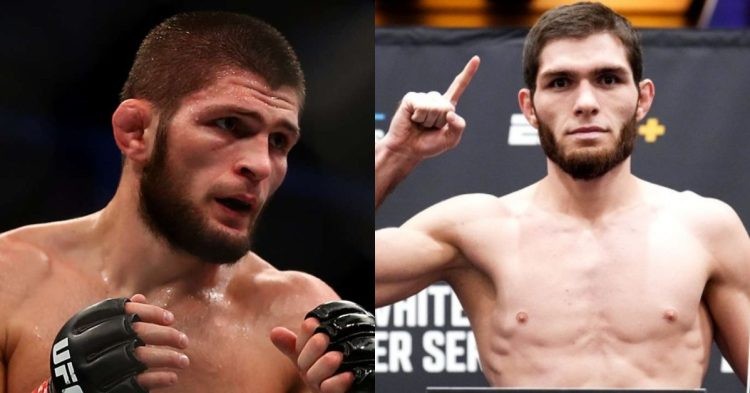 Nurullo Aliev who is born in Dushanbe, Tajikistan grabbed the attention of fight fans around the world after picking up a terrific victory against Josh Vick in the recently concluded DWCS event. Aliev put on a one-sided performance to finish Vick in the first round with his brutal ground and pound strikes.

However, the 22-year-old lightweight fighter’s skills inside the octagon were not the only thing that made noise on social media. Because after taking a closer look at his face, there were comparisons drawn with former lightweight champion Khabib Nurmagomedov and consequently, many fight enthusiasts started calling him a doppelganger of The Eagle.

So far Nurullo Aliev has maintained a flawless record of 7-0 and has earned the UFC contract with his recent win at the DWCS. It is needless to say that as Aliev makes his progress in the UFC, the comparisons with Khabib will start increasing as they have similar looks and fighting styles.

Subsequently, he will be under a lot of pressure to deliver to the expectations of fight fans. With that being said, everyone would be interested to see how he performs in his UFC debut as he has the potential to emulate the same kind of success that Khabib has achieved in the UFC.

What’s next for Nurullo Aliev after winning his fight at DWCS?

Nurullo Aliev was amongst the four other fighters who managed to impress UFC President Dana White with their performances and earned a UFC contract at the DWCS that took place on September 20th.

The lightweight contender is extremely confident in his skillset and has promised Dana White to become the champion in two years time. From the little that we have seen of Nurullo he has the tools to make it big but as of now he has a long way to go.

We could see him make his debut soon in the next few months as he is itching to get back inside the octagon. There are potential fighters for Aliev’s debut fight like Arman Tsarukyan and Brad Riddell who could help him make a statement and get into the top 15 of the division.

However, it is highly unlikely that the UFC will pit him against a tough contender straightaway that too in his debut bout. Do let us know in the comments section who you think Nurullo Aliev should face in his debut UFC fight?