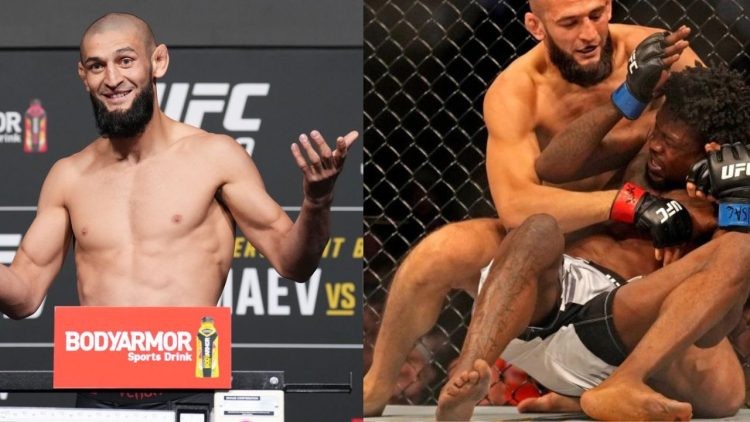 Following the events of UFC 279, Khamzat Chimaev found himself in an interesting situation. After missing weight for his main event fight with Nate Diaz, Chimaev was on the receiving end of the fan’s and the media’s disapproval. Thus, Borz is seemingly the new bad guy of the UFC.

Many stated that Khamzat‘s inability to make 170lbs is a problem and he should target 185lbs instead. On the other hand, experts have advised Khamzat to bag the 170 lbs title before moving up to middleweight. However, it appears that Borz has made his decision.

Going by Khamzat‘s recent post, middleweight is seemingly the next destination for Chimaev. Currently ranked No.3 in the Welterweight rankings, the decision has seen some interesting responses. For the most part, people are not impressed with the decision, with many stating that Borz should have capitalized on his position at 170.

Some of the fans reacted stating: “@KChimaev 170 Title Shot first man”, “@KChimaev Bratha, how you going to get to #3 in the division and THEN go up a weight class. That close to the belt…”, “@KChimaev Brother Belt is too close to you First 170 Please.. 3 Weight Division we’re Coming.” Similarly, many fans have been warning Chimaev to vary of middleweight mainstays like Paulo Costa and Robert Whittaker.

However, there are many factors that have gone into Chimaev’s decision. For starters, he is a big guy and has to nearly kill himself every time to make weight. As such, cutting weight is seemingly a big problem for Chimaev and it is not a bother for him to make 185lbs instead.

Who Does Khamzat Chimaev Fight Next?

With 185 on the cards for Chimaev, there are very interesting matchups that we can see. For the most part, Khamzat’s run in the division was very dominant. If he wishes to, Khamzat can fight a top 5 contender in his first fight itself.

After a scuffle at the UFC PI, there has been a lot of back and forth between Chimaev and Paulo Costa. It all began due to Costa’s comments on Khamzat calling him a ‘gourmet Chechen’. Since then, Costa has been relentless on social media, calling for a fight against Chimaev.

With 170 no longer on the cards, Borz has no choice but to answer Costa or pick a fight with #2 Robert Whittaker. However, no one knows what Chimaev will do. Who will Khamzat fight next? Only time will tell.