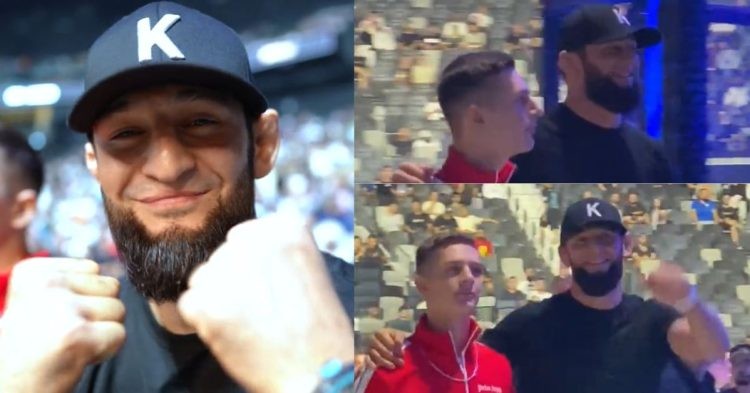 A few weeks ago, there were rumors surrounding UFC welterweight superstar Khamzat Chimaev being detained in Petersburg in Russia. He was apparently set to visit his family and thereafter go to Brazil for an important job.

Moreover, as per Combate’s report, the government authorities confiscated The Borz’s passport and it seemed that Khamzat was stuck in Russia. Following this news, many people online started assuming that Khamzat was being recruited for war by the Russian government.

However, Khamzat’s manager denied all the rumors and said that there are no problems and travel restrictions on the UFC welterweight fighter. Despite sharing a good relationship with Ramzan Kadyrov who is an influential figure in Russia, there were many doubts regarding his release from the country.

Although The Borz put all the rumors regarding his travel restrictions to rest as he was spotted at the UFC 280: Oliveira vs Makhachev PPV. Khamzat was seen enjoying himself watching the fights at the Etihad Arena in Saudi Arabia along with the Russian minister Ramzan Kadyrov’s son Ali Kadyrov.

Kadyrov’s sons were sent to the frontlines to fight in Ukraine and they returned recently after capturing a few territories. The Borz posted pictures with the teenager on Instagram.

Despite Khamzat being in attendance to witness the UFC 280 PPV in Abu Dhabi, this does not confirm that the UFC welterweight can travel anywhere as any Russian can stay for a month without a passport in UAE.

Khamzat Chimaev has once again made headlines for the wrong reasons after his recent appearance at the Etihard Arena for the UFC 280 PPV with Ramzan Kadyrov’s son Ali Kadyrov.

Fans have criticized the UFC welterweight for sharing pictures with Kadyrov’s son Ali who was a part of Russia’s frontline in the ongoing war with Ukraine. This is not the first time that fight fans and people around the world have criticized Khamzat as the welterweight contender was heavily condemned by fans for sparring with Ramzan’s sons.