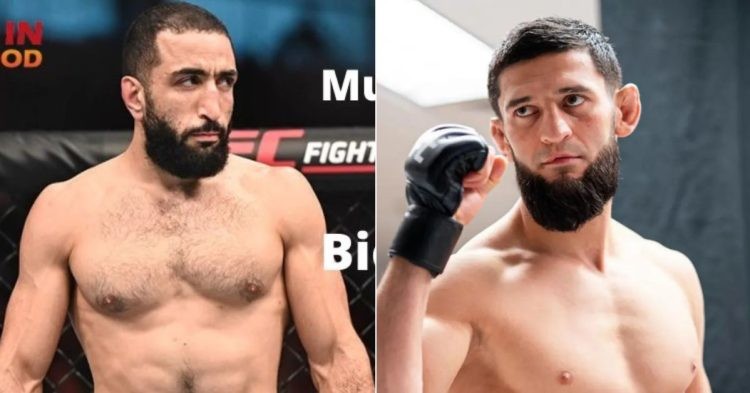 Khamzat Chimaev and Belal Muhammad have given the green signal to a potential fight inside the Octagon later this year. It goes without saying, not a lot of fighters have responded to Chimaev, who has been calling out the likes of Jorge Masvidal, Colby Covington, Conor McGregor, and Nate Diaz for quite some time now.

Stop picking on guys who don’t want to fight you .. only two fighters in the top 5 that haven’t fought Kamaru winner gets next . @danawhite @seanshelby https://t.co/tTli8m8O6B pic.twitter.com/cUZmDaV9Ri

However, there is one name that has been asking to fight Khamzat Chimaev for as long as one can remember. Belal Muhammad in a recent tweet, once again called out Chimaev for a showdown inside the cage to determine the #1 contender for the UFC’s welterweight championship. In response, the Borz had an interesting proposition to make.

Chimaev stated that he will be ready to share the cage with Belal Muhammad should he avoid using the Palestinian flag to the Octagon. Probably not aware of UFC’s recent rule where the company banned the use of flags during walk-outs, Belal had this to say in response.

Both the fighters have now seemingly agreed to fight each other in October, later this year in Abu Dhabi. UFC has planned a huge event in Abu Dhabi. However, nothing has been confirmed so far.

Belal Muhammad’s rise in the welterweight rankings has been nothing less than spectacular. After agreeing to fight Leon Edwards on short notice in a fight that had an unfortunate end for Belal following a vicious eye-poke, he has picked up wins over the likes of Demian Maia, Stephen Thompson, and Vicente Luque to comfortably find himself in the top-5 of the division.

Khamzat Chimaev, on the other hand, is currently ranked #3 in the division. There’s no denying Chimaev’s prowess inside the Octagon despite such a short career in the UFC.

Both the fighters rely heavily on their grappling and wrestling skills and use them to their advantage in order to dominate their opponents. While Belal showed improved striking against Vicente Luque in his last fight, Chimaev proved that he doesn’t just talk the talk, but walks the walk after a three-round war against Gilbert Burns.

While it will be interesting to see who will get the better of the other on the ground, it’s a little easier to predict that Chimaev has an upper hand on the feet. With power in his hands, Chimaev carries the ability to shut the lights out of Belal Muhammad. Be that as it may, in a game of mixed martial arts, anything is possible!