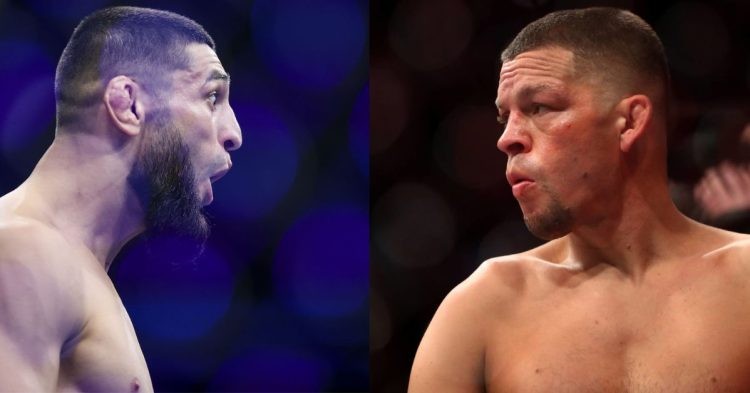 Nate Diaz will return to the Octagon in a five-round fight against Khamzat Chimaev in the main event of UFC 279 on September 10 inside T-Mobile Arena in Las Vegas.

Ever since the fight is announced, fight fans don’t look too happy about UFC’s decision to book Diaz vs Chimaev. While the excitement and anticipation for the UFC 279 exist, the prediction for the fight is fairly one-sided, with almost every fight fan siding with Khamzat Chimaev to get the job done.

Be that as it may, Khamzat Chimaev’s coach is not taking Nate Diaz lightly. Speaking to Submission Radio, Chimaev’s coach Andreas Michael shared his opinion on Nate Diaz and what makes him a dangerous opponent.

“We are ready for that. Darren Till is like a southpaw. Tremendous striker, we have got him, helping up in the sparring. We are getting a couple of other guys. We got like a ten-time world champion in grappling helping us.” Andreas Michael said.

It’s safe to say that Khamzat Chimaev is not taking Nate Diaz as lightly as the narrative for the fight is. Many including Michael Bisping has opined Chimaev runs through Nate Diaz, with Dan Hardy even calling it an assassination attempt.

Be that as it may, one thing that cannot be ignored is Diaz’s penchant for showing up in latter rounds. Additionally, as far as Chimaev’s last fight with Gilbert Burns is concerned, we did see the Borz slowing down in the latter half of the fight.

“We need time to prepare for the right camp. We got to make battle plan and practice it.”

Should Chimaev fail to finish Diaz in the first three rounds, it won’t be wrong to say that he could be in for a long night at UFC 279.