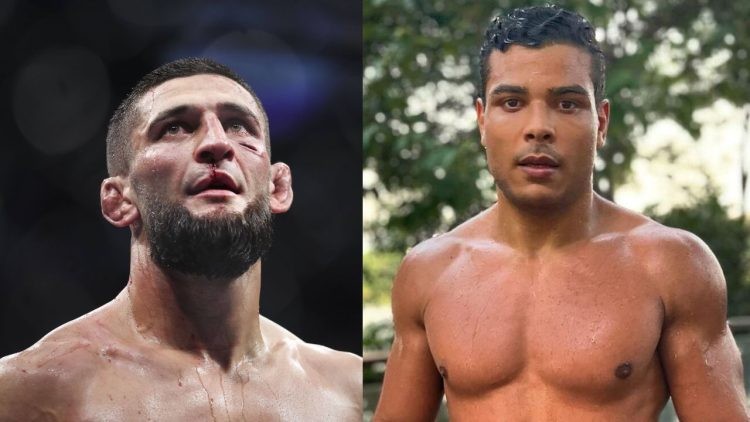 Following the events of UFC 279, Khamzat Chimaev finds himself in an interesting situation. After missing weight for his main event fight with Nate Diaz, Chimaev was on the receiving end of the fans’ and the media’s disapproval. Thus, Borz is seemingly the new bad guy of the UFC.

Despite the boos and the backlash he received, Khamzat does not seem fazed. Instead, he ragdolled Kevin Holland at UFC 279 and then gave his haters an earful. Somewhere in between all his shenanigans, Khamzat also ended up beefing with Paulo Costa.

In a Youtube video on his channel, former middleweight champion Michael Bisping weighs in on the matter. “For Khamzat Chimaev, this man’s gotta be careful. If he wants to be the welterweight champion, which he can be, he can’t go off and fight Paulo Costa. But will he do that?” For the most part, Bisping feels that Khamzat should avoid Costa’s callouts.

Further, Michael adds, “If he [Khamzat Chimaev] goes and fights Paulo Costa, and if he beats him, he’s probably going to get a title fight at 185lbs and 170 will seem like a distant memory… Costa’s talking a lot of sh*t and he’s trying to get Chimaev to take the bait. He’s doing the right thing. That would be a massive fight.”

After a scuffle at the UFC PI, there has been a lot of back and forth between the pair. It all began due to Costa’s comments on Khamzat calling him a ‘gourmet Chechen’. Since then, Costa has been relentless on social media, calling for a fight against Chimaev.

Khamzat Chimaev vs Paulo Costa: Will It Happen?

Despite the “Eraser” trolling and calling him out constantly since UFC 279, “Borz” has been silent. Whilst personally, Chimaev wants to “smash everybody, kill everybody”, he needs to think about the situation very carefully.

Following his victory over Kevin Holland, he is the number one contender to fight for the belt. Barring Gilbert Burns, Chimaev has been untouchable, to say the least. Additionally, if he wants to fulfill his mission of becoming a three-divisional champ, he should first focus on the 170lbs title.

If Chimaev instead falls for Costa’s bait and wins or loses to him, it’ll create a very tricky situation towards the 170 lbs title. However, no one knows what Chimaev will do. Who will Khamzat fight next? Only time will tell.