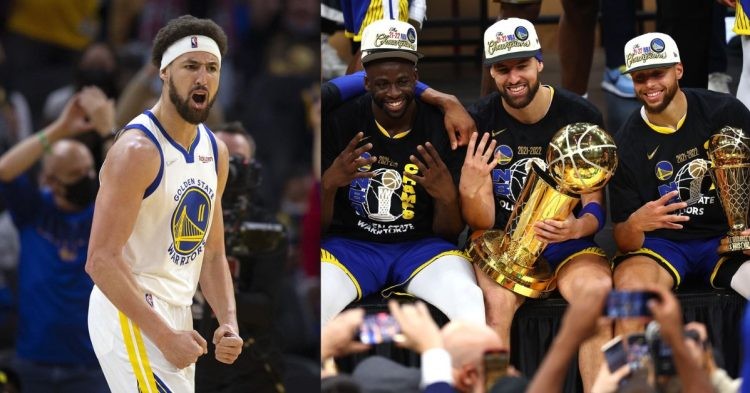 In the 2021-22 NBA season, the Golden State Warriors brought home the NBA Championship trophy. It was their 7th championship of all time and 4th one in recent times. The Warriors may have dominated in the past, but one of the common opinions is that this year’s win was a special one. The one thing that has stayed constant throughout their dynasty is their star trio of Stephen Curry, Klay Thompson, and Draymond Green.

The 2022 title was different from their other titles, mainly because of how much GSW was written off. The last time they won the title was in 2018. However, it all went downhill for the franchise as they missed the playoffs two seasons in a row. Two of the main reasons were Kevin Durant’s departure and injuries for their key players.

However, the Warriors came back stronger in the 2021-22 NBA season to prove their doubters wrong. In addition to that, they also got their best players back and healthy, as Steph and Klay got back in form.

Can the Golden State Warriors win the championship in the 2022-23 NBA season?

After winning the title this year, it seems like they are already looking to defend it. Recently, Klay weighed in on the Warriors’ chances of winning a title next season.

Klay Thompson on this upcoming season for the Warriors 👀

Thompson said during an Instagram live, “2023, I ain’t making no promises but I like our chances.” The interesting point to remember is that he said this just a day before the GSW training camp. In recent times, head coach Steve Kerr has also revealed the plans for the franchise to win another title next season.

The Warriors surely have the talent on their roster to win, together with outstanding strategy from their coaches. But one thing they have to make sure of is that key players like Klay, Steph, Draymond, and Andrew Wiggins do not get injured. Last season, Klay made the most-awaited comeback. He averaged 19.8 points, 3.9 rebounds, and 2.6 assists in 54 games in the 2021-2022 regular season and playoffs.

Similarly, DG was also in electrifying form, as was Wiggins. However, as we all know, Steph was in a league of his own. He averaged 31.2 points, 6.0 rebounds, and 5.0 assists in 6 games of the NBA Finals against the Boston Celtics alone. That also included a Game 4 masterclass, which was pivotal in GSW winning the series. If they can keep their key players fit and running, the Warriors can surely win their 8th Championship.