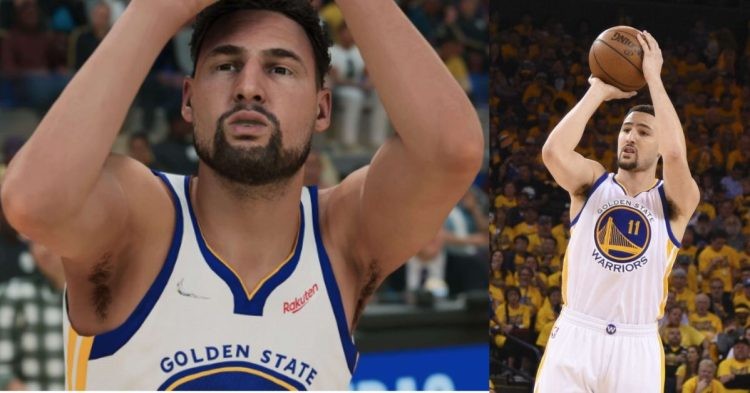 Klay Thompson is considered to be one of the best sharpshooters in NBA history. The 2021-2022 season marked the return of the Golden State Warriors’ star after missing out the previous two seasons, rehabilitating from his torn ACL and Achilles Tendon injuries. However, Klay wasted little to no time in catching up with the team’s winning streak tempo after the All-Star weekend.

He heavily contributed to the team’s success and helped the team secure their fourth Championship win in the last eight seasons. He dropped 30-point games on multiple occasions and maintained his ‘Game 6 Klay’ moniker.

Nevertheless, the NBA 2K creators have decided to give Klay an 83 OVR in the highly anticipated NBA 2K23. Klay Thompson should receive nothing less than a rating of 88 OVR, if we consider his incredible comeback.

We would get into specifics as to why 2K’s developers gave Klay a lower rating and how he ranks in comparison to the players with equal, if not, higher ratings. The NBA 2K creators are known to make controversial decisions when it comes to a particular player’s ratings every year, so the case of Klay Thompson and Ben Simmons does not seem unusual.

There should not be any kind of argument over the better player, as Klay delivered phenomenal performances in playoffs matches. Moreover, he was instrumental in Game 6 of NBA Finals against the Boston Celtics, when the Warriors won the title.

Klay Thompson and Ben Simmons both have the same rating on 2K23…do y’all think they got it right? 🤔 pic.twitter.com/3Ko86ZDH52

On the other hand, Ben Simmons did not even play the entire season. He faced recurring conflicts with the staff and players on the 76ers roster. This led to his mid-season trade to Brooklyn Nets. Unfortunately, Simmons was out with a back injury. Hence, it could lead to the speculation that he may be out for the next season as well.

It is evident that the NBA 2K creators are just banking the ratings upon the previous seasons. In the 2019/2020 season, Klay was out due to injury. Ben Simmons was averaging 16 points, 8 assists, 7.8 rebounds and 2 steals during his stint with the 76ers. Giving Klay and Simmons the same rating based on the last season is absolutely erratic and highly astigmatic.

If we consider Klay’s averages of 20.4 points, 4 rebounds and 3 assists in just 32 games, Klay certainly deserves an 88 OVR. 2K certainly should not give him the same rating as Simmons.